You! Out of the gene pool! 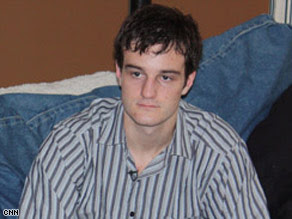 Meet 18-year-old Phillip Alpert. Phil's an idiot. When he recently got into an argument with his 16-year-old GF, he took it kinda hard. So he found the nude photo that the GF (she's also an idiot) sexted him, and sent it to lots of her friends and her family. You can read about it here. Smart, Phil. Real smart.
.
GF's family and friends were not amused. Someone tipped off the police, and Idiot Phil got his a$$ busted for child pornography. He pled "no contest" to the charge, and was later surprised that that counted as a conviction. Way to grasp the judicial subtleties, Phil.
.
Phil is now a registered sex-offender. And on probation for 5 years. He's bitter that passing around naked pics of an underage girl without her consent is viewed as a crime. Be happy you're not in jail, Phil. With a cellmate named "Animal".
.
One last thing. The article says Phil and GF have been dating (CNN's word, not mine) for 2½ years. So GF was what - 13½ or 14 - when they started going out? 8th or 9th grade? Hey, parents of GF! That's freaking way too young to have your daughter going out on dates.
Posted by terry at 4:56 PM

Somewhat OT, but why on earth has a civilised [sic] country like the USA got different ages of consent across the states?

Maybe you should adopt the policy of Oman or Pakistan - It's illegal if you ain't married. But then again, how old do they have to be to get married?

Other oddities seem to be countries like Bolivia and Botswana where the male and female ages differ by 2 years. And those 2 countries are opposite in terms of which is the younger gender.

I've always figured that if you're old enough to fight for your country, you've reached the age of consent. Also you should be given the right to vote, be allowed to drive (having passed some test of course) and drink alcohol. Not all at the same time necessarily ;-)

I agree - the drinking age, fighting age, driving age, and voting age should all be the same. let's make that 30.

the age of consent should be the same as the age at which one can be tried as an adult. let's make that 12.

well, i was thinking about how many 20-somethings get DUI's. by 30, it's pretty much out of everybody's system.