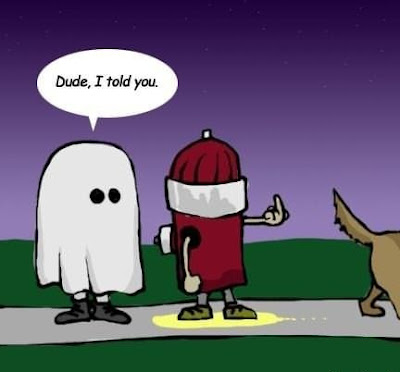 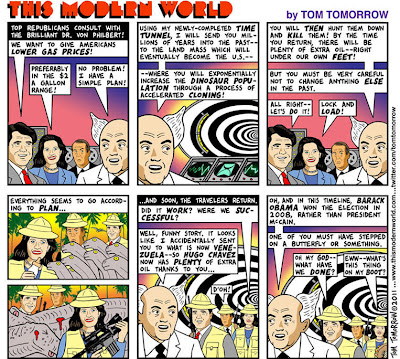 It takes a certain IQ level to Time Travel responsibly.  Otherwise you just screw things up worse than they already are.  It's kinda like being a Federation starship commander.  You're safe with Jean-Luc Picard.  You're iffy with James T. Kirk.  You're hosed with Beavis & Butthead.
Posted by terry at 3:19 PM No comments: 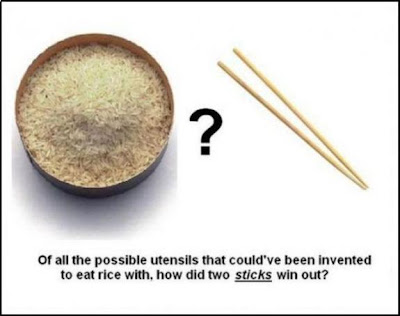 There's a lot of truth to this.  Some years back, I spent 10 days on a business trip in mainland China.  We were in the Hangzhou region, and on the road a lot.  The little restaurants we ate at did not have knives, forks, or spoons.  So I had to make do with chopsticks.

I suck at using chopsticks.  I lost about 10 pounds on that trip.
Posted by terry at 8:35 PM No comments:

Oh my.  I simply have to visit Google Earth more often.  They've added some fantastic features, including "Street View".  So I can now revisit my childhood home, back in Lenhartsville, Pennsylvania and see how it's changed in the half-century since we left it. 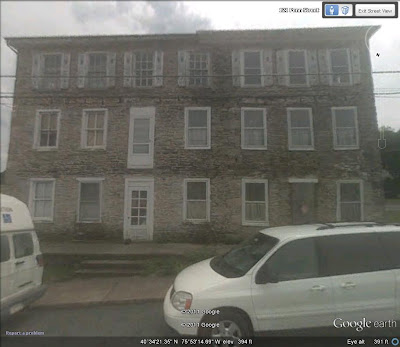 ﻿
First of all : no, that door in the middle of the wall is not photoshopped.  Until recently (meaning 1993, when I last had a chance the house in person), there were porches for each of the three floors, and that door opened out onto the second-story one.
Second, we actually shared the house with another family.  We lived in what amounts to the left-four windows' worth of space.  They lived in the right-three.  There was also a basement, which means there was lots of room and lots of rooms.  The stones in the facing have either been redone or repainted.  I remember them as various shades of gray. 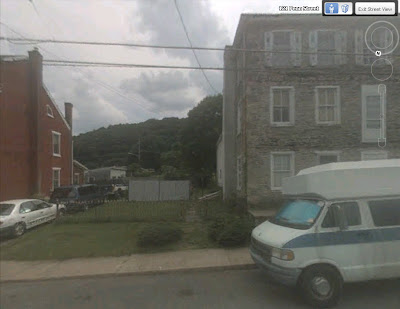 The side yard has changed extensively since my childhood.  When we lived there, there were two huge maple trees along the left-hand fence.  And in front of the fence, we had a christmas-type tree that was about 5' tall; which had rocketed to about 30' tall when I was there in '93.  We had a backyard patio, which I remember my dad making by laying a sh*tload of hexagon-shaped cement pieces.  And that shed in the back yard is new.
Still, the yard looks quite nice, and the structure itself hasn't changed too much.  It's good to see it still standing.  No one knows how old it is, but it was a hotel during the Civil War.
Posted by terry at 5:41 PM No comments: 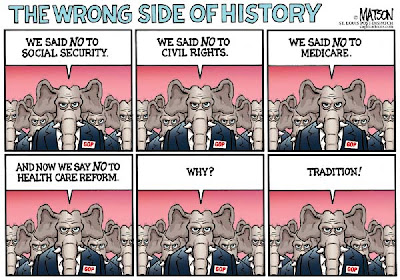 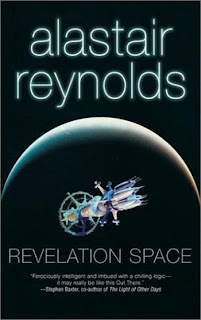 "You can read my emotions now, is that it?"

"No.  It's just that your emotions ought to mirror mine.  We think very similarly, you and I.  More so than ever now."  Calvin paused.  "And I don't mind admitting - I'm very, very scared.  Probably more scared than a piece of software has any right to feel.  Isn't that profound, Dan?"

"Save your profundities for later - I'm sure you'll get the opportunity."


(from Revelation Space, by Alastair Reynolds)


The full review is here.
Posted by terry at 6:38 PM No comments:

The worst thing about censorship 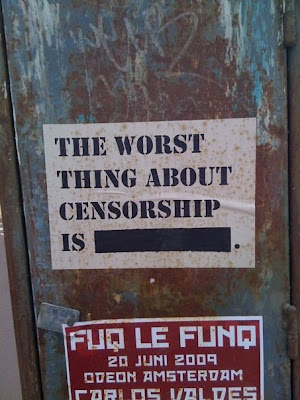 the 2011 version of Monopoly 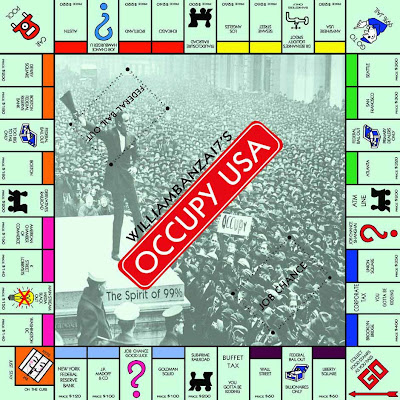 It amuses me that Bachman-the-Nut repeatedly comes off sounding so moronic and so ditto-headed that Sarah Failin' Palin decided not to run for president.  They'd both be going after the Idiot vote, and thus far, Bachman comes off as the bigger idiot of the two.

Not that either is/was a serious threat to win the Presidency.  They're a couple of dingalings, and even fatcat Republicans are reluctant to waste their money contributing to the campaign of a can't-win candidate.
Posted by terry at 6:09 PM No comments: 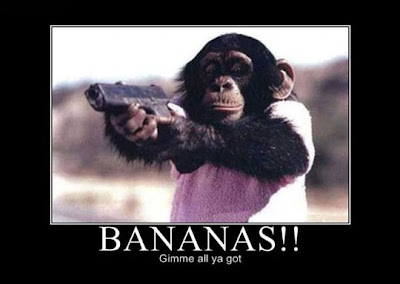 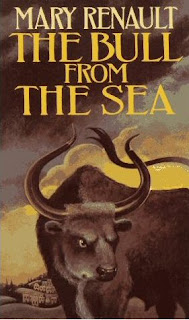 ... Theseus the Athenian, team-leader of the Cranes; the odds-on fancy, the back-somersault boy, the first of the bull-leapers.  They had painted me on the walls of the Labyrinth, carved me in ivory; there had been little gold Theseuses on the women's bracelets.  The ballad-makers had promised themselves and me a thousand years of singing.  In these things my pride still lingered.  Now it was time to be my father's son.

(from The Bull from the Sea, by Mary Renault)

The complete review is here.
Posted by terry at 7:32 PM No comments: 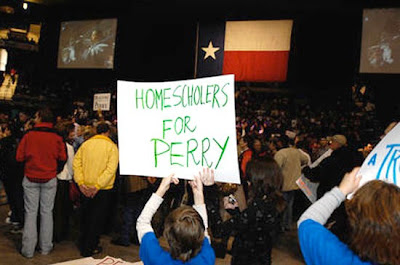 Because we're dumbing down America.  And idiots vote Republican.
Posted by terry at 8:43 PM No comments:

The Element of Surprise 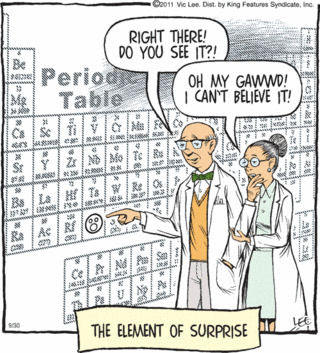 Listen.  I know it's an internet comic.  And it's free.  And the emphasis is on the humor not the grammar.  But c'mon now.  When something shrivels up, the word is "wither".  Like it's used here.

The "whither" word is for when you want to use a high-falootin' word for 'where'.  As in "Whither goest thou?"  Eeeeeshhh.  Like fingernails on a chalkboard.
Posted by terry at 6:17 PM No comments: 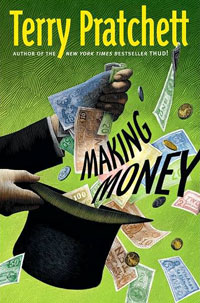 "I am a damned man, Miss Drapes, judged and damned," said Mr. Bent, staring at the wall.

"But I have sinned.  Oh indeed I have!  I have worshipped false idols!"

"Well, sometimes you can't get real ones," said Miss Drapes, patting his hand and wondering if she should call someone.  "Look, if you want absolution,  I understand the Ionians are doing two sins for one this week -"

"It's caught me," he whispered.  "Oh dear, Miss Drapes.  There is something rising inside that wants to get out!"

"Don't you worry, we've got a bucket," said Miss Drapes.


(from Making Money, by Terry Pratchett)


The complete review is here.
Posted by terry at 7:13 PM No comments: 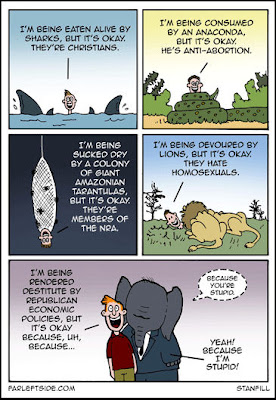 I'm always dismayed by how short of a memory the Electorate has.  The economy was on the brink of collapse when we dumped Dubya's sorry a$$ in 2008.  We are still in the midst of a recession no matter what anyone says; but overall, things have stabilized economically.

We have a long way to go, and one critical reform needed is to the Banking Industry.  Alzheimered Reagan foolishly pushed deregulation, and Dubnutz allowed lending policies during his regime that border on being criminal.  Wall Street Moguls are greedy fat-cats who will gouge the poor unless specifically forbidden to do so.

So join your local "Occupy" organization and march/protest/occupy to show your support.  You ARE part of the 99%, not the 1%.
Posted by terry at 8:37 PM No comments:

back from Los Angeles 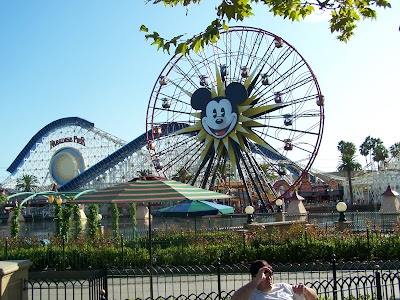 Three wonderful, thrill-packed days - one each at California Adventure, Disneyland, and Six Flags Magic Mountain.  Lots of walking.  My feet are sore, my calves are barking at me, and my stomach is still not quite recovered from the roller coaster rides at 6F-MM last night.

The weather was perfect, the company and conversation was fantastic, and lots of great pics were taken.   With a bit of luck, I'll find time to post some of them.  It was nice to get away, but it's also nice to be back home.  Our puppies are glad we've returned as well.
Posted by terry at 6:19 PM No comments:

Off to see Dumbo and Goofy 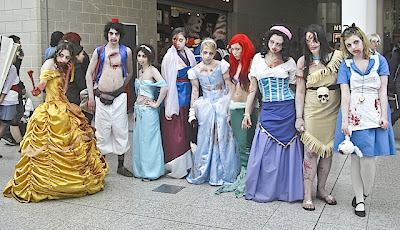 We're off to spend the weekend in L.A.  The plan is to do Disneyland, California Adventure (or whatever it's called), and Magic Mountain.  Okay fine.  But I've seen Disneyland 3 or 4 times already.  So I've hatched a plan to sneakily divert us into a parallel universe.  Similar to ours of course (that's why they call it 'parallel'), but one in which Zombies rule.  BRAINZ!
Posted by terry at 9:18 PM No comments: 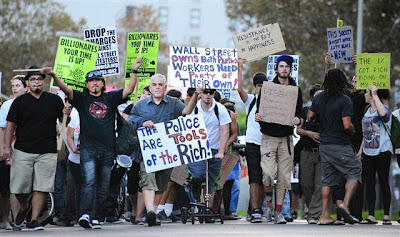 When  :  Saturday, 15 October  (not sure of the time)
Where  :   Wesley Bolin Plaza
Why  : Cuz I'm part of the 99%, not the 1%
Besides, I haven't illegally occupied anything since my college days, when we liberated a fountain at ASU in the name of the National Front for the Liberation of South Vietnam (Viet Cong), and held it for two weeks.
Posted by terry at 6:03 PM No comments: 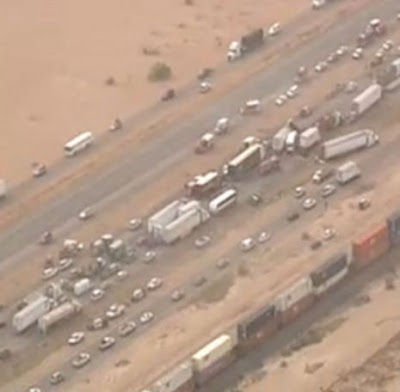 We know Arizona drivers aren't worth a sh*t when it rains.  And they're even worse in snow.  This is not a critical thing, since those two phenomena seldom happen here.  But dust storms are a different matter.  Arizona gets dust storms like L.A. gets smog.

And we got one today.  No, not a mile-high "haboob-sized" one; just your ordinary happens-all-the-time variety.   But you still have to take care.  At zero-visibility, it is advisable to slow down to at least 80 mph while transversing the freeways.  And pay attention to your surroundings a little bit; maybe going so far as to hang up your cell phone.  You might even consider exiting the freeway until the storm passes.

Someone apparently forgot all that this afternoon on the I-10, somewhere around Picacho Peak.  The result was a 30-vehicle pile-up; 1 fatality; and several more with life-threatening injuries.  Perhaps Arizonans should be forbidden to drive whenever anything more than two clouds appear in the sky.
Posted by terry at 6:00 PM No comments:

It is interesting to watch the "Wall Street Protests" unfold. First of all, because they're so under-reported.  Second, because they refuse to be "polite" demonstrators - carefully complying with every stoopid police regulation ("Do Not Block the Roadway"; "Stay Several Blocks Away From Meaningful Landmarks"; "Inform the Police Beforehand of Everything You're Going to Do"; etc.) .  Third, because unlike we protesters from the 70's, they don't really have any clearly-stated goals.

Methinks it is a balancing reaction to the Tea Bag Idiocy.  Elections are coming up; it looks to be a dogfight, no matter which wing-nut the Gopheads nominate; and someone needs to grab the headlines from the Tea Baggers.

And one has to be impressed by the way these protests are spreading.  The New Yorkers are overcoming the media stonewalling.  The Chicago protest is sustaining itself.  And Los Angeles has its own Anti-Bankers demonstrations going.

By coincidence, I will be in L.A. this weekend.  Mostly to go see Dumbo and Nemo.  But I just might find time to join the demonstrators.  Jeez, I haven't been in a protest since 2003.  And that was in London.  I'm overdue.
Posted by terry at 7:44 PM No comments:

and I for one am looking forward to using the "Stare Creepily" one a lot.
Posted by terry at 6:36 PM No comments: