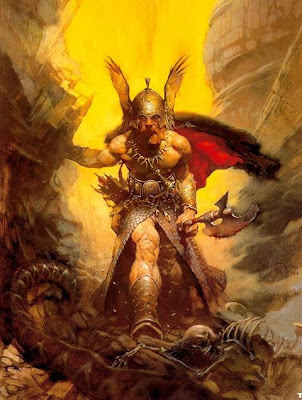 Kewl album cover art from an LP I just digitalized.  It is a Frank Frazetta masterpiece, of course.  But what album/group?  Answer in the comments, but if you're a rock-&-roll geezer, you really should already know this.
Posted by terry at 8:09 PM 1 comment: 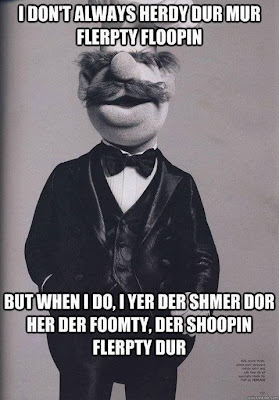 There is nothing I can add to that pearl of wisdom.
Posted by terry at 8:41 PM No comments: 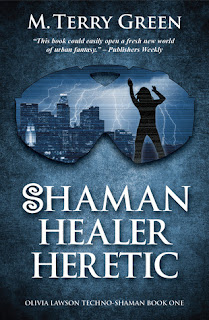 Shamans Outed for Rash of Sicknesses,” read one article title.


“Shamans Blamed for Epidemic,” said another.


She sat up and started scanning through the regular news feeds.  There was the national economic and political news, foreign affairs and arts, but all of the local news seemed to be about the sudden increase in emergency room traffic.  In one news video, the anchor posed a question.


“Are shamans spreading disease in your neighborhood?”


“What?” said Livvy out loud, not believing what she was hearing.

I Have A Dream 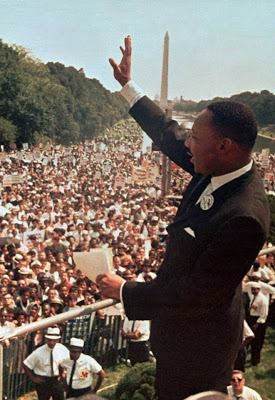 50 years ago today.  Progress has been made, but we still have a long way to go to eradicate racism.
Posted by terry at 8:13 PM No comments:

Well-played, Janis.  Pink Floyd music is the right music for ...well... just about everything.
Posted by terry at 8:38 PM No comments: 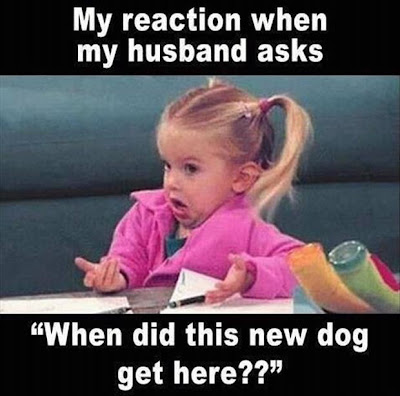 Very true, except that I'm the husband, and Liz has given me that look about a half-dozen times - both with strays she brings home, and with permanent additions to our canine menagerie.
Posted by terry at 8:36 PM No comments: 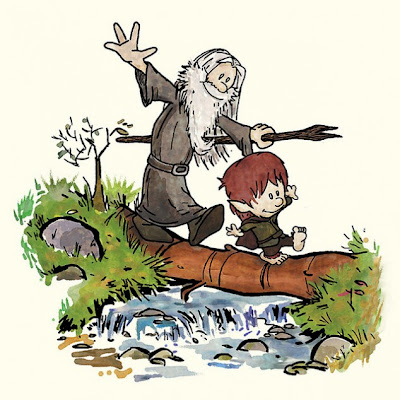 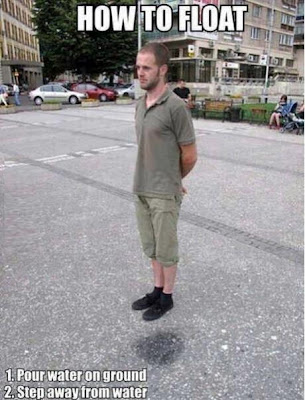 Absolutely jaw-dropping!
Posted by terry at 9:02 PM No comments: 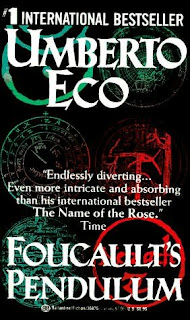 Diotallevi and Belbo, both from Piedmont, often claimed that any good Piedmontese had the ability to listen politely, look you in the eye, and say “You think so?” in a tone of such apparent sincerity that you immediately felt his profound disapproval.  I was a barbarian, they used to say: such subtleties would always be lost on me.


“Barbarian?” I would protest.  “I may have been born in Milan, but my family came from Val d’Aosta.”


“Nonsense,” they said.  “You can always tell a genuine Piedmontese immediately by his skepticism.”


“No, you’re only incredulous, a doubter, and that’s different.”

(from Foucault’s Pendulum by Umberto Eco) 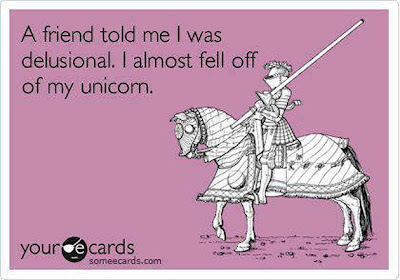 I've been called delusional a number of times.  My inner voices tell me to just ignore it, those other people are jealous that their heads are so quiet.
Posted by terry at 7:52 PM No comments: 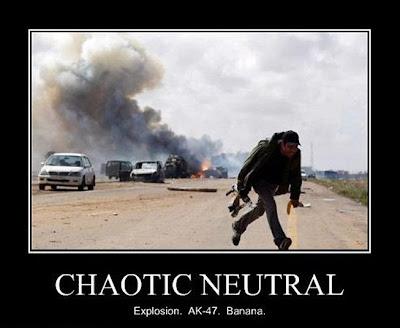 Back in my AD&D days, I always had trouble visualizing what Chaotic Neutral would be.  Now I know.
Posted by terry at 8:48 PM No comments: 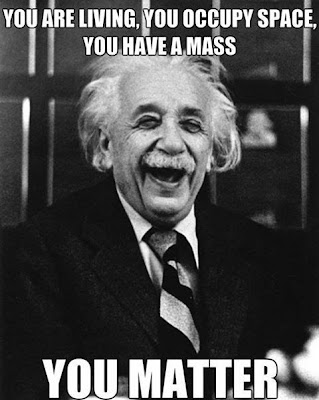 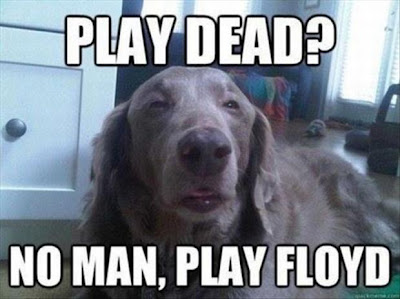 Back in my single days - and that was many years ago - my roommate had a dog, Jessie, that not only listened to music, but had a way of telling us when she thought was we were playing was sh*t.

We humans would sit in the back of the room (as it faced the turntable), enjoying the music via the rear speakers whilst partaking of the sacred weed.  Jessie would come in and lay in the center-front of the room, so she got the full stereo effect of the front speakers.

Now, I know what you're thinking - that it was just our fuzzy, stoned brains that were imagining this.  But I'm a scientist, so scientific tests were performed to test the hypothesis.  And the results were incontestable.  If we put Pink Floyd on the turntable, Jessie would stay in the room with us.

To be honest, I can't remember now what music Jessie considered to be crap, but it was consistent too.  I'm thinking it may have been harsh music, such as Allman Brothers "At Fillmore East".  But that may be wishful recollection on my part, as my roommate and I held differing opinions about it.

So the above jpeg is in memory of you, Jessie.  The breed and coloring don't match you, but the musical taste certainly does.
Posted by terry at 9:43 PM No comments: 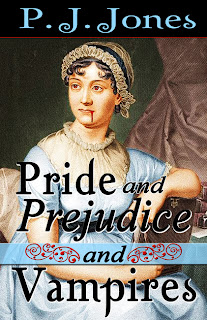 Elizabeth straightened.  Her keen vampire eyes narrowed on Mr. Darcy across the dance floor.  Despite his petulant scowl, he wasn’t bad looking.  He was taller than average with dark hair and dark eyes.  Even more promising were his overly large hands.  Lydia had told her that men with large hands usually had large egos.
Very large egos.

(from Pride and Prejudice and Vampires,  by P.J. Jones)

He was a top-tier drummer for a top-tier rock band a long time ago.  He will be appearing here in the greater Phoenix area later this year, albeit playing a different genre.  Who is he?

Useless hint : He cleaned up nicely since back-in-the-day.  Answer listed in the comments. 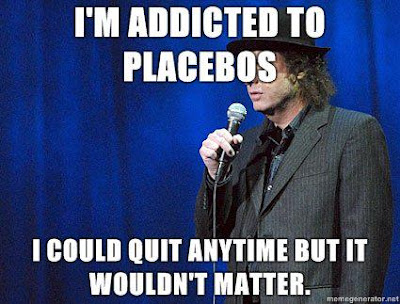 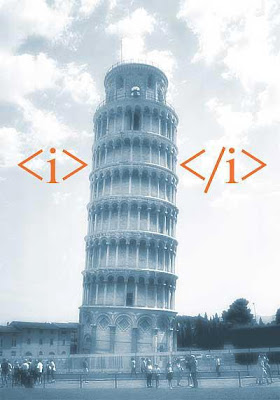 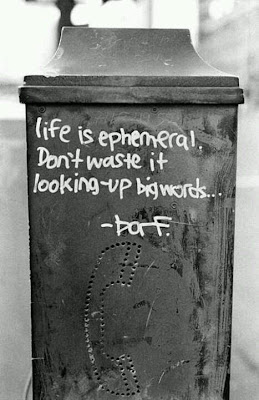 Timely advice, since I am presently plodding my way through an Umberto Eco novel.  I've written down a couple of the dozens of words I'm not sure of - ogive is one of them - but if I stopped to look them all up, it would be Labor Day before I finished the book.
Posted by terry at 8:43 PM No comments: 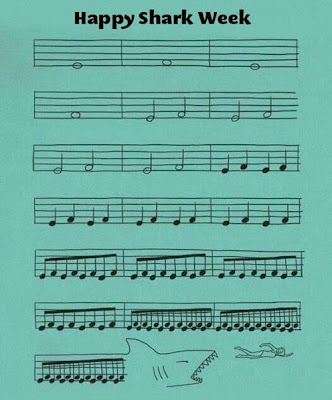 I learned to read music at a very early age, thanks to a little, wrinkly, ancient, German lady who taught me to do something called solfege.  Basically, you sing the written music.

She used solfege in conjunction with giving us piano lessons.  I don't think we (my sister and I) were even in grade school yet at the time.  I did okay on the piano until it came time to start playing with two hands, and where the left hand did something totally unrelated to the right hand.

This is akin to rubbing your belly while patting your head, and I never did get the hang of it.  Inevitably, both hands would end up playing the same thing, just an octave or two apart.  Thus endeth my piano career.

But the solfege lessons stuck, and I've been able to read music ever since.  Which comes in handy when someone posts a joke like this.
Posted by terry at 8:41 PM No comments: 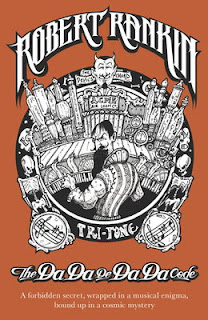 “How did you know that the keys from the police car would work in this car?”


“Everyone knows that,” said Jonny.  “Police car keys are special keys that can work any vehicle.”


“Are you sure that everyone knows that?”


“Absolutely,” said Jonny.  “The same as everyone knows that if you leave your hall light on at night when you go out, burglars will think you’re at home and not attempt to break in and rob you.”


“And everyone knows that?”


“Everyone except for burglars,” said Jonny.  “The world is a wonderful place, is it not?”

(from The Da-Da-De-Da-Da Code by Robert Rankin) 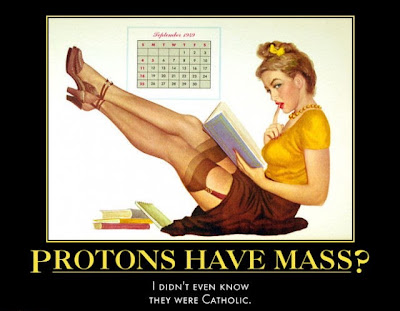 Or Demotivational Fridays.  Whatevs.
Posted by terry at 8:07 PM No comments: 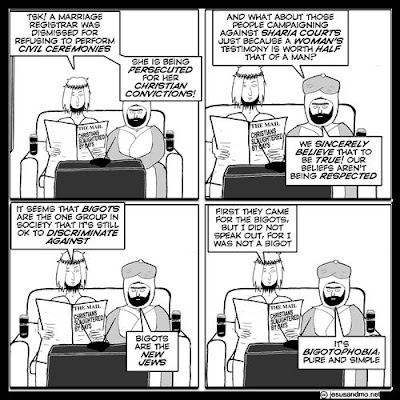 As a longtime resident of Arizonistan, I can speak from experience - there are a lot of bigots here that really feel bigotophobia is a real problem that needs to be addressed at once.
Posted by terry at 8:31 PM No comments: 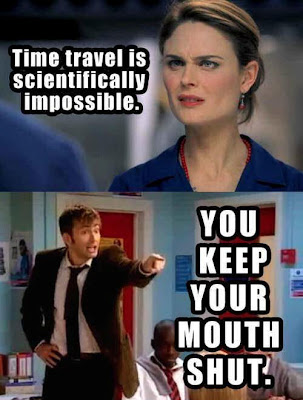 First of all, Time Travel is scientifically possible.  Read Brian Greene's excellent book - The Fabric of The Cosmos (reviewed here).  Even better, watch the 4-part PBS special by the same name if you can find it on YouTube or somewhere.

Secondly, since I happen to be a Time Traveler (or, as we in the trade call it, "Chrono-Hopping"), the point is moot.

Third, Bones is a pathologist.  She'd know as much about Quantum Physics as I'd know about Forensics. 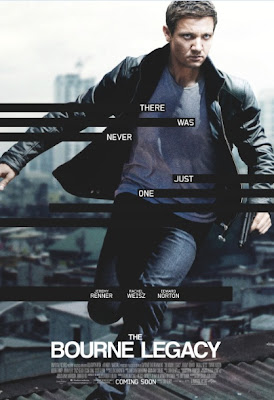 My third movie watched in 2013, The Bourne Legacy.  Since I usually average two movies a year, it appears I'm turning into a cinemaholic.

TBL was a decent enough flick, with action from the get-go, and a repeat of the intrigue from the first trilogy.  Matt Damon isn't anywhere to be found, and I spent the first third of the movie trying to figure out who was now playing Jason Bourne.  Silly me, it turns out the JB character isn't in this one at all, save for a brief cameo shot on a wanted poster.

I didn't recognize any of the actors/actresses, including the two stars, Jeremy Renner and Rachel Weisz.  The romance is kept to a minimum, but it appears they plan to make this into another trilogy (Holy Plagiarism, Batman!), so we can expect these two to go a-bedding in the next installment.  Provided of course, the baddies don't bump off the girl to p*ss off our hero.

At 135 minutes, and a PG-13 Rating, you certainly get your money's worth of excitement, plus a bunch of bitchin' location footage, and an entertainingly-long motorcycle chase as the climax.  The hired thug, Larx, was a bit of a disappointment though.

I can't complain about any of the movies I've watched in 2013.  The other two are reviewed here and here. 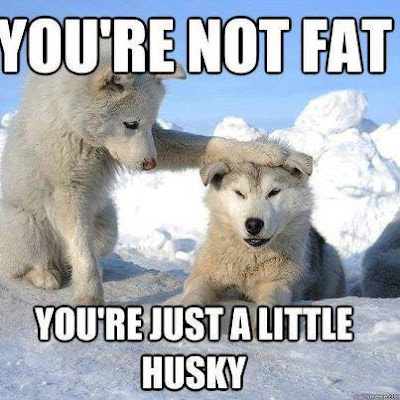 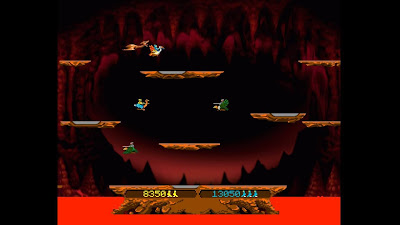 Once upon a time, we played this for hours on end.  Simple play, really.  And even simpler graphics.  Yet totally captivating.

Answer in the comments.
Posted by terry at 6:03 PM 2 comments: 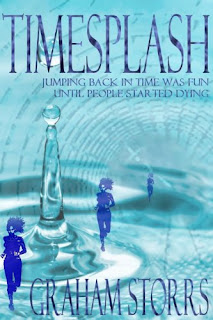 Jay had begun to explain that he was doing something worthwhile, that he was making a contribution to something important to everyone, but his father had not been listening.

“You’re barely out of short trousers, Jason.  You can’t expect to have a mature perspective on these things.  I’m sure your life is very exciting, playing cops and robbers in exotic places-“


(from TimeSplash,  by Graham Storrs)

if they were alive today

I'm not sure of (left to right) Number 1, but 2 thru 4 are Bach, Beethoven, and Mozart.  I'd guess "Brahms" for the first one, to complete the "three great B's of Classical music", but he really doesn't look like the pics of Brahms at Wikipedia.
Posted by terry at 8:20 PM 2 comments: 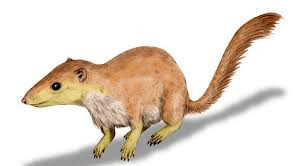 Meet my great-great-(insert 20 million more greats)-grandmother.  Her name was Purga, and I think I got her eyes.  You can read more about Granny if you Wiki "Purgatorius".

Oh yeah, she's your ancestor too.  I guess we're related.
Posted by terry at 6:59 PM No comments: