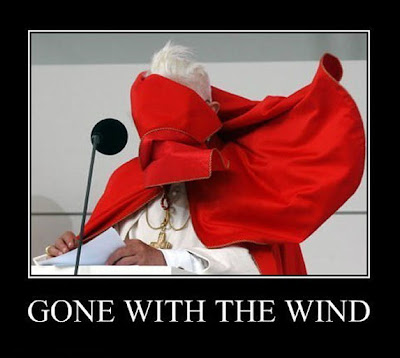 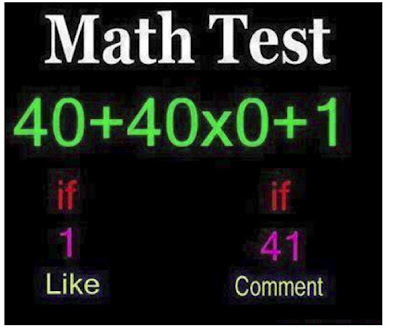 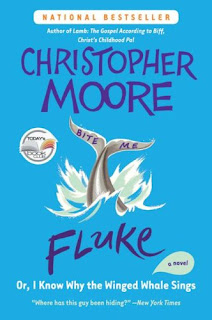 
“His Imperial Majesty, Haile Selassie, emperor of Ethiopia, Lion of Judah, Jesus Christ on earth, son of God.  His blessings upon us.  Jah, mon.”


(from Fluke by Christopher Moore) 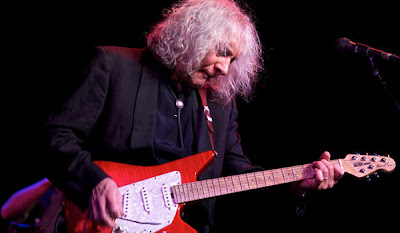 We did indeed make it for the Albert Lee concert on Saturday night.  And it was, as expected, fantastic.  Because we didn't get our tickets until Thursday night, we were on the last row, but that turned out to be Row 16.  We'll post about the venue in a couple days.

Albert played all sorts of genres.  A couple of songs from his Emmylou Harris days; one from the Everly Brothers.  A bunch of good old 50's rock & roll.  Mostly is was two hours of him showing off on the guitar, although he took a break to play a couple songs on keyboards, including "Highwayman".

His band was equally great, particularly the keyboardist, he with the ponytail and stocking feet.

All in all, it was a fantastic concert.  Started right on time.  No opening band.  No intermission.  Well worth the $30 or so for a ticket.

So Thank You, Albert Lee, for stopping by in Phoenix and putting on one helluva show.  My jaw dropped to the floor with every guitar solo.
Posted by terry at 6:22 PM No comments:

The Tiger and the Pope 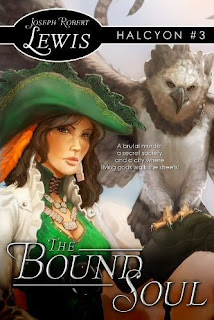 “And then, well” the dwarf shrugged, “it would only be natural for a young lady to hold me in a higher esteem.  If I was a hero, I mean.  Wouldn’t she?”

“Is this a particular lady, or a hypothetical one?”

“A hypothetical one,” Tycho said slowly.  “With long black hair that shimmers red in the sunlight, and a lovely singing voice…and very muscular legs.”

(from The Bound Soul – Halcyon #3: A Quest for Revenge,  by Joseph Robert Lewis) 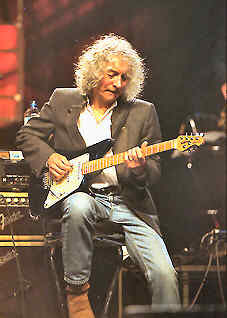 The guy is a frickin' guitar legend.  He's played C&W with Emmylou Harris, the Blues with Eric Clapton, Blugrass with Ricky Skaggs and Earl Scruggs, and rocked with the Everly Brothers.

And he's in concert here in Phoenix this Saturday night.  I am seriously thinking about going to see him.
Posted by terry at 6:21 PM No comments: 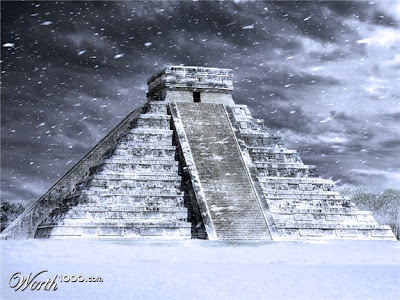 Yeah, I know.  It's winter.  But this is Phoenix, Arizona.  Valley of the Sun and all that.

It fiddle-farted rain all morning.  Then around 3:00 in the afternoon, the cold front apparently finally arrived.  With a bunch of hail that turned our office's parking lot briefly white.

Okay fine.  But then around 6:00, sh*t got real.  We got SNOW!  And not just flurries.  Enough to lay on windshields and in backyard nooks and crannies.  In the 40+ years I've lived here, I have never seen anything like this.

We're now sending this storm to the midwest.  Have fun with it there, y'all.
Posted by terry at 7:56 PM No comments:

how to pronounce French words 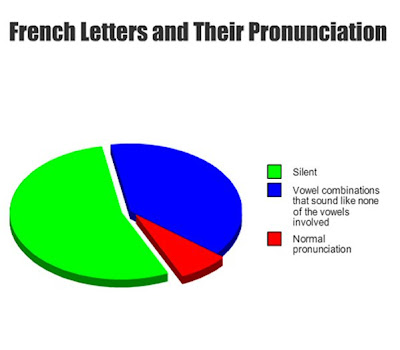 The graph is accurate, but only tells part of the story.  There are whole syllables that are silent.  For instance, parle, parles, and parlent are all pronounced exactly the same.
Posted by terry at 5:49 PM No comments:

the Gospel according to Sarah 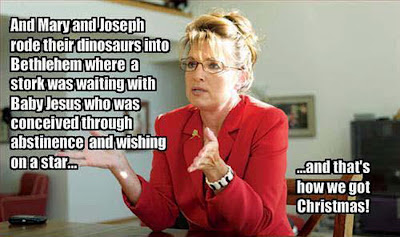 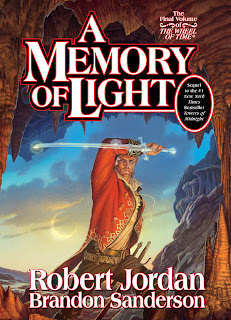 
(from A Memory of Light by Brandon Sanderson & Robert Jordan) 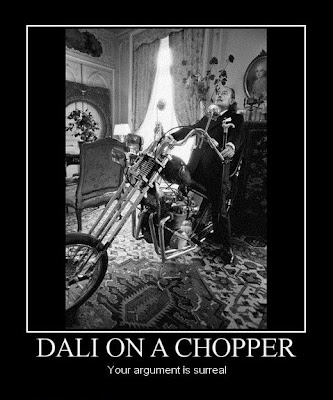 It's been a while since I posted something Dali-esque.  One of these days, I need to get back to Escher-esque as well.
Posted by terry at 6:37 PM No comments: 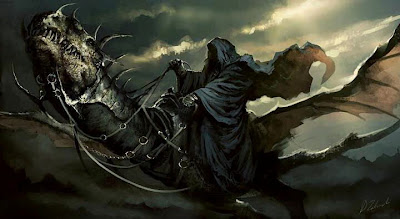 For the first time ever, my company is giving us Presidents' Day as a paid holiday.  Which is greatly appreciated since it is a long time between the last holiday (New Year's Day) and the next one (Good Friday).

I'm taking the opportunity to do a little sky-riding on my dragon, Gleep.
Posted by terry at 5:53 PM No comments: 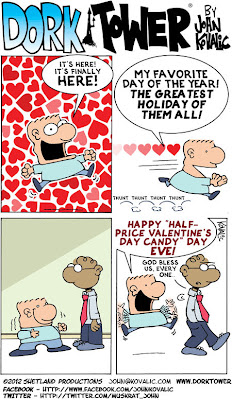 there's a bustle in my hedgerow! 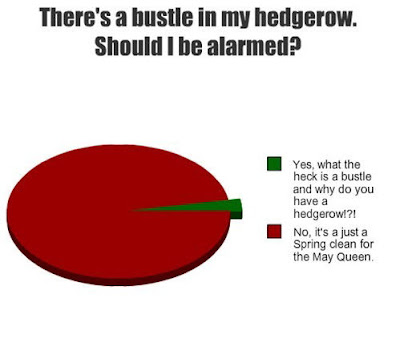 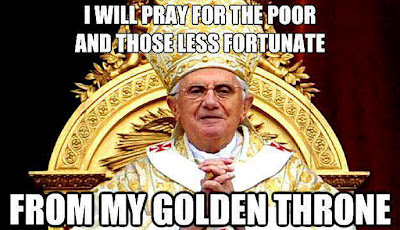 Pope Benedict XVI is the first Pope to abdicate since 1415, and the first one to do so voluntarily since 1294.

Certainly his health has something to do with it - he's 86 years old.  And the Cardinals who elected him in 2005 did so with the tacit understanding that, being an old fart, he'd be gracious enough to die rather quickly.  Pope John Paul II reigned for 27 years, and most of those who wear the furry red-and-white thought that was entirely too long.

Still, Popes are supposed to rule until God chooses to take them home, the logic being Her will be done.  So methinks there's a story here.  Beyond the physical health.

Is he getting senile, and wants to quit before he gets too zonked to know it?  Is a new and even more damaging Sexual Molestation scandal about to break?  As head of the Roman Catholic church is he about to be required to appear in court in one of those cases?  Will the Vatican itself be sued?

It's useless to speculate, but Benny is too much of a traditionalist to buck the the-yoke-till-you-croak protocol.  And it's something more than just not feeling like getting out of bed in the morning.
Posted by terry at 5:39 PM No comments:

Sylvia Plath (b. : 10/27/32) died on 11 February 1963.  Ever the dutiful mother, she protected her kids by placing moist towels underneath the kitchen door before turning on the oven's gas and sticking her head as far into the oven as possible.  In those days, depression and bipolar disorder were little understood, and the world of poetry lost a rising star way too early in her career. 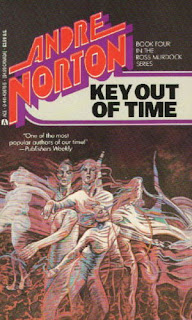 “Pandora’s box.”  Ross drew a hand across his forehead, smearing sweat and fine sand into a brand.


Ashe nodded.  “Maybe we run that risk, loosing all the devils of the aliens.  But what if the Reds open the box first on one of their settlement worlds?”


There it was again, the old thorn which prodded them into risks and recklessness.  Danger ahead on both paths.  Don’t risk trying to learn galactic secrets, but don’t risk your enemy’s learning them either.

(from Key Out Of Time by Andre (Alice) Norton) 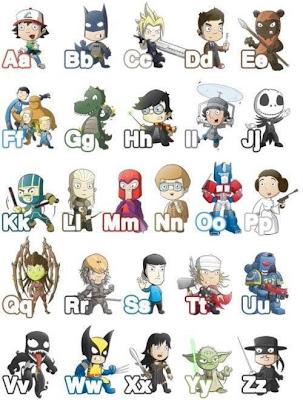 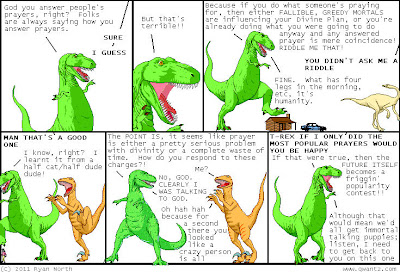 Yeah, it's a cartoon.  But there are some pretty good points about prayer in there too.
Posted by terry at 8:51 PM No comments: 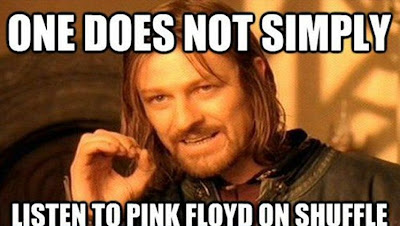 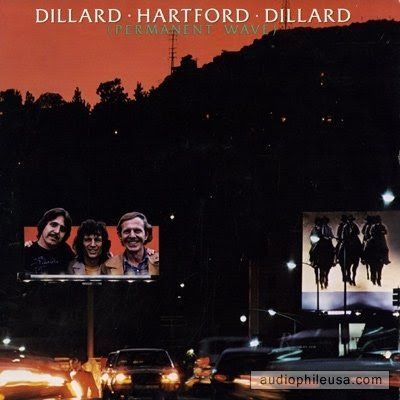 A hard-to-find 1980 collaboration between "New Grass" John Hartford and brothers Doug and Rodney Dillard of the Bluegrass band "The Dillards".

This was the second album that these three collaborated on, the other being Glitter Grass (1977), which I converted a while back.  Permanent Wave (1980) seems to be lower-key and lower-energy than that one; but is still worth the listen if you like Blue Grass/New Grass.  IMHO, the best tracks are the more lighthearted ones.

There's no doubt that the jewel of this album is the final song - No Beer In Heaven.  NBIH is a German Polka tune from the 1950's, which Wikipedia calls "a song about the existential pleasures of beer-drinking".  Existential, eh?  Wow.  Hartford adds his own second verse about the fact that there's also No Smoking (of various substances) in heaven.  No one has yet put this track out on YouTube; I'd really appreciate it if somebody would.

The LP itself was in pristine condition; I considered not even running the scratch-removal program.  An audiophile owned this album.  Amazon packaged both of the D-H-D albums onto a single CD, and it sells for $15.10.  Downloading the MP3 files only costs $9.99.

This isn't John Hartford at his finest, but it's still some pretty damn good bluegrass.
Posted by terry at 6:36 PM No comments:

I want one of these 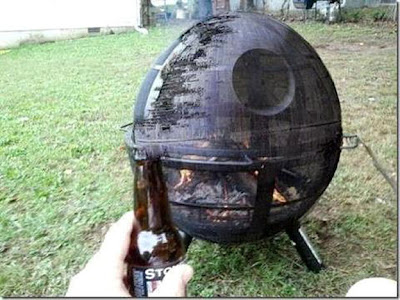 Better yet, I want the marketing rights for it.
Posted by terry at 7:33 PM No comments: 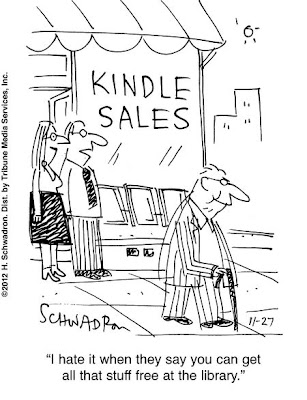 I understand the joke - books are free at the library.  But the fact of the matter is, our local library also allows you to check out free Kindle downloads.  If you're wanting a recent and popular release, you may have to get on a waiting list.  But that's true of "book" books too.

And for the record, the library also has a deal where you can download free MP3 music.  Three tracks per week.  It's called Freegal.  Check to see if your library takes part in this resource.
Posted by terry at 6:25 PM No comments: 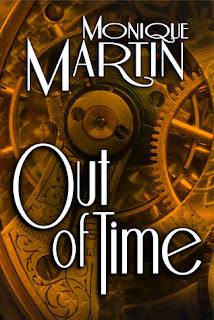 
(from The White Tree, by Edward W. Robertson)

Why Pavlov used a dog 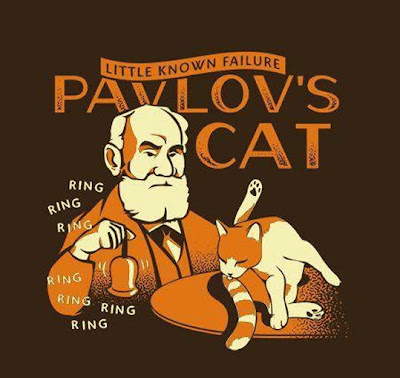 Not all scientific experiments are successes.  That's why we run them.
Posted by terry at 5:59 PM No comments: