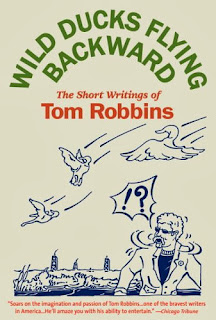 I want the newspapers I read to smell like the violins left in pawnshops by weeping hobos on Christmas Eve.


I want to carry luggage that reeks of the neurons in Einstein’s brain.


I want a city’s gases to smell like the golden belly hairs of the gods.


And when I gaze at a televised picture of the moon, I want to detect, from a distance of 239,000 miles, the aroma of fresh mozzarella.

Album Cover of the Day - Blodwyn Pig - Ahead Rings Out 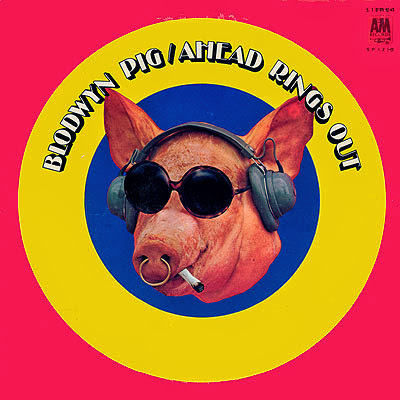 Here's a group that I haven't thought about in decades.  But Radio Free Phoenix (RFP) played a track from this album a couple weeks ago - "The Change Song" - and it was positively awesome.

Blodwyn Pig was a short-lived British blues band from the late 1960's, featuring Mick Abrahams, an ex-guitarist from Jethro Tull.  They only put out two albums before breaking up.

I never owned this album, but the album cover is unforgettable, n'est-ce pas?
Posted by terry at 7:26 PM No comments: 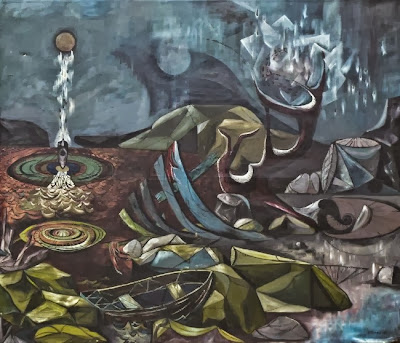 I learned of Leo Kenney from reading Tom Robbins' book "Wild Ducks Flying Backward".  Robbins does his usual fine job of detailing Kenney's style.  But there's no substitute for going over to Google Images and looking at the actual art.
Posted by terry at 8:52 PM No comments: 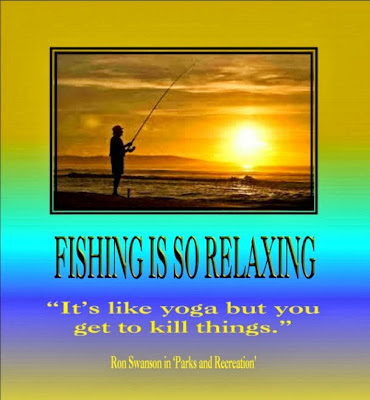 OTOH, I do have a hard time Relaxing.
Posted by terry at 7:31 PM No comments: 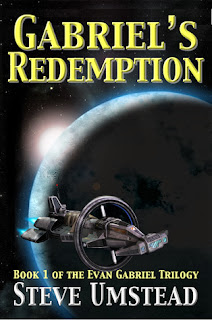 “We’ve been working our tails off the last few years, both to construct all of these facilities, and to mine enough ore to par for it all.  And we’ve got two more mountain habitat candidates we’re looking into.”

(from Gabriel’s Redemption,  by Steve Umstead) 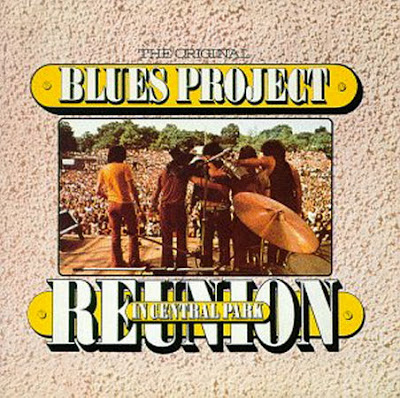 Recorded June 24th, 1973 in Central Park, New York, this is both a double-LP and a live album.  It was also the end of an era - being the 7th, and final Blues Project album, not counting two compilation albums put out 15-20 years later. 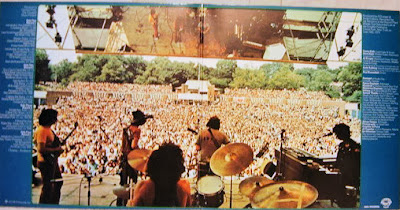 The LP's were in good shape - no major scratches and no skips.  Which motivated me to remove the scratches manually.  Alas, I found there were more small scratches than I anticipated, so I also used the software program to de-scratch the tracks.

The musicianship and the track selections are great.  Really, I could've marked every track in pink.  I have two quibbles, and they are minor.  First, the total length of each side is very short - 12 to 14 minutes.  I suspect this means they really only enough music for three sides.  So instead of culling a couple tracks, they "stretched" it into four sides.

Not surprisingly, the second quibble is the amount of clapping after each track.  Another "stretching" ploy.  I deleted quite a bit of it when I converted the LP. 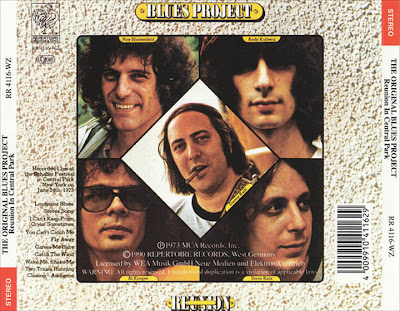 Neither Amazon nor iTunes has this album available as MP3 downloads, although both offer it as an Import CD.  For beaucoup dollars, of course.  So it made sense to convert it.

If you're on FaceBook (and who isn't?), the Blues Project has a page there.  Mostly it's Danny Kalb and Steve Katz.  They don't appear to post a lot of updates, but I've only "liked" it for a week or so.

Also, I made the Catch The Wind track into a YouTube video, mostly because no one seems to have posted the tracks from this album there, and the guitar solo on CTW is positively bitchin'.  The YouTube video is easy to find - just type in "Blues Project Catch The Wind" and look for the back cover image shown above.

Don't let the clapping and brevity put you off; this is a fantastic album.  If you run across it, snap it up.
Posted by terry at 7:04 PM No comments: 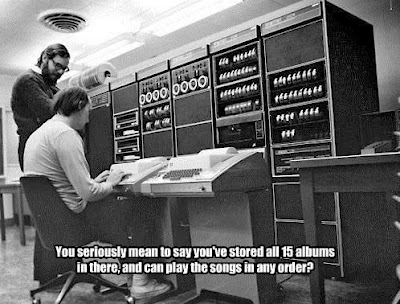 Yes, we could record and store music back in the late 1960's.  On cassette tapes.  By laying the microphone close to the stereo speakers.  And vainly trying to keep background noise to a minimum.

We could also play computer games.  Well, only one - a text-based Star Trek game.  And you had to ask the TA in charge of the computer lab at ASU to (wink wink) give you access to it.  For the most part, you "flew" around in sectors of empty space.  Until you crossed paths with a Romulan ship, which usually beat the schnark out of your puny Federation phasers, photon torpedoes, and shields.
Posted by terry at 8:47 PM No comments: 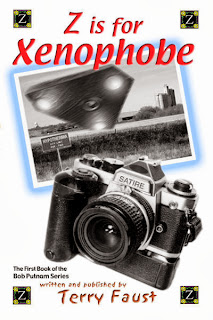 
Schaftschticker said, “On the contrary.  It’s already flown.  Only 20 to 30 percent of the eligible voters exercise their rights regularly – and of those only a fraction understand why they are even casting a ballot.  A mere 10 percent of the population understands the Bill of Rights and most think the Supreme Court is a female singing group.  Our tests show that if we put joke candidates on the ballot, nine times out of ten they’re elected.”

(from Z is for Xenophobe,  by Terry Faust) 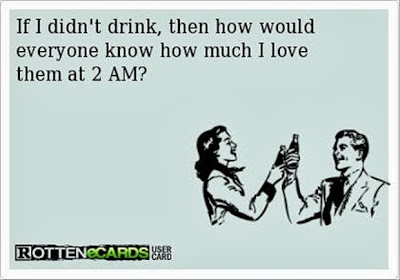 Something quick, as I've been working on another YouTube video.  This is #6.  I'm getting more comfortable with each effort.
Posted by terry at 8:17 PM No comments: 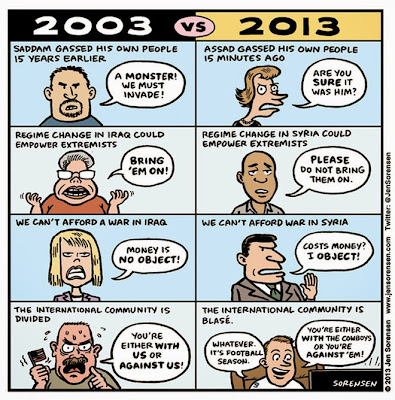 What a difference 10 years makes.  Well, and a regime-change in the White House too.
Posted by terry at 7:59 PM No comments: 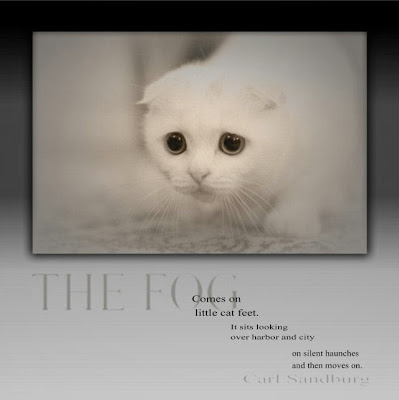 American poetry is generally the pits, outside of Shel Silverstein, Carl Sandburg, and some of Charles Bukowski's stuff.  The above is probably the most powerful snippet of this genre.
Posted by terry at 8:21 PM No comments: 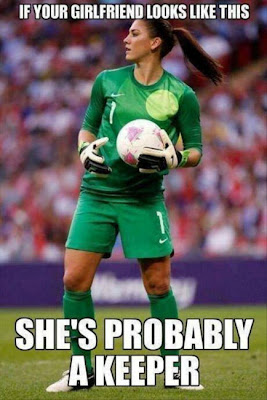 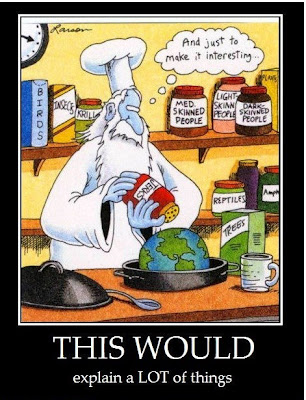 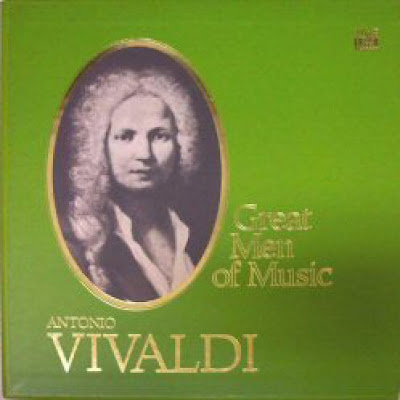 In the 1970's Time-Life Records put out a sh*tload of boxed sets of Classical music, generally grouped by composer.  Recently, a bunch of them showed up at my local used-book store, which also carries used records.  I picked up four of the sets - Franz Joseph Haydn, Antonin Dvorak, Richard Strauss, and this one, issued in 1978 - Antonio Vivaldi.

There are 4 LP's in each set, and the bookstore was selling them for $3-$5, which is a fabulous price to pay for roughly 4 hours of music,  And owners of Classical records tend to take meticulous care of the discs.

The LP's were generally in good condition, so I de-scratched them manually.  Some were pristine; but a couple were in poorer shape and took some time.  Sides 03 and 06 are "church music", which means they are almost 100% choir-singing, and thus, although quite good, they are not to my taste.

The Four Seasons are Vivaldi's most popular and well-known works, and deservedly so.  But  most of the concertos and sonatas were stellar too.

You can find all of these on YouTube.  And FWIW, this is just a drop-in-the-ocean of Vivaldi's total library.  Per Wikipedia, he composed 500+ concertos, 46 operas, and 90 sonatas.

Vivaldi's music here is full of life and quick in tempo.  I wouldn't play it while trying to go to sleep, but it does make for some great background music at work.
Posted by terry at 8:21 PM No comments: 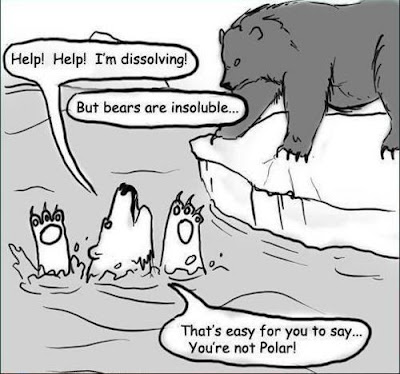 Excellent!
Posted by terry at 6:46 PM No comments:


It’s because this is a comprehensible job, he thought.  No huge amorphous army, where he had to leave a dozen crucial things a day in the hands of men he had never fought battles beside; no not-quite-omniscient computer angel to show him unassailable reasons for doing things he despised; no snakepit spy-hive of a city . . . just a cavalry patrol into hostile country, go in, get the information and get out.  Succeed or die.


(from The Forge by S.M. Stirling & David Drake)

See "Chess and Pigeons", below.
Posted by terry at 8:42 PM No comments: 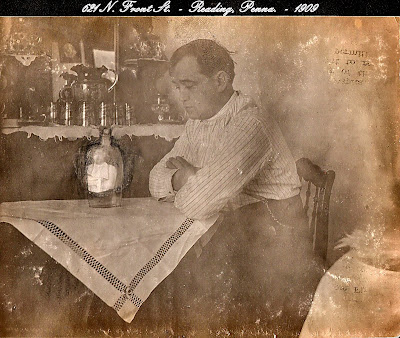 An incredible image done by my grandfather in 1909.  The text at the top is what was written on the back of the photo.

I'm pretty sure that's Grandpa seated at the table, contemplating the bottle.  But that's not a label on the bottle; it's an image of a friend of his.  There is some scratchiness around the bottle's edge, so I'm guessing he superimposed the second, smaller portrait image on the larger photograph.

But how?  I don't have the negative, and for all I know, it might have even been an old "thick glass" one, since the picture's in sepia.  But I'll vouch for the positive "as is".

Grandpa did some other image-manipulation tricks - like putting a mirror image of his young daughter in a picture to make it look like they were twins.  But unless he traveled forward in time, bought a copy of Photoshop (and a computer), I'm at a loss to explain how he pulled this off.
Posted by terry at 5:58 PM No comments: 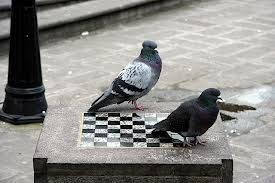 "Arguing with idiots is like playing chess with a pigeon. As good as I am, the bird is going to sh*t on the board and strut around like it won anyway."

There are a couple variations of this quote floating around in cyberspace.  Quite often "idiots" is replaced by either "Republicans" or "Creationists".

Those work, but I kinda like the more generic "idiots".  It allows Republicans and Creationists to read the quote  without being aware that it's aimed at them.
Posted by terry at 8:01 PM No comments:

If you read Pearls Before Swine on a regular basis, you know that a Stephan Pastis pun is a thing of beauty, and it is measured by just how contrived he can make it.  The more contrived, the better. 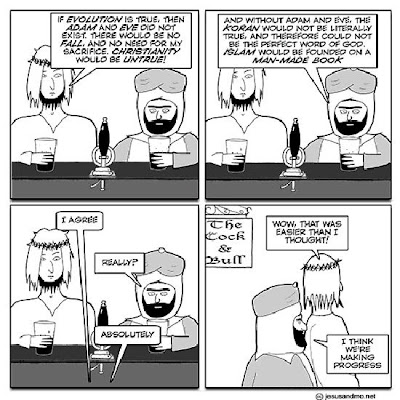 Gotta love the barmaid.
Posted by terry at 6:56 PM No comments: 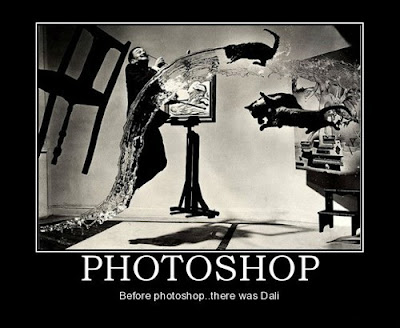 I am a Salvador Dali fanatic.  I've got 3 or 4 big books with his works in them.  The man was an artistic genius without peer.

This is a legitimate Dali painting.  A self-portrait, if you will.  The way it presages Photoshop is uncanny.  I sometimes get the feeling he was a time-traveler (like I am), and frequently chrono-hopped forward to see what the future in art held.
Posted by terry at 8:36 PM 4 comments: 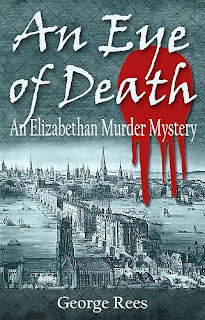 Finding myself a quiet niche I settled down with a tankard of beer and surveyed the scene.  Alcohol-fuelled boasts were belched out all around me.  Merchants overreached, money lenders tricked, taverns drunk dry, battles fought, duels won.  But above all, women.  Women the boaster had bedded, was bedding, or was going to bed.  If a tax could be levied on lies, all other taxes could be abolished.  Her majesty would be the richest ruler in the world.

(from An Eye Of Death,  by George Rees) 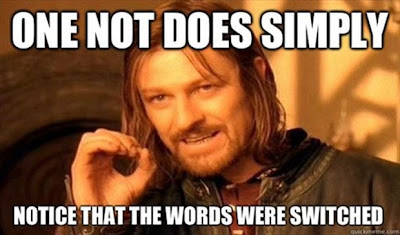 Well played, indeed.
Posted by terry at 8:29 PM No comments: 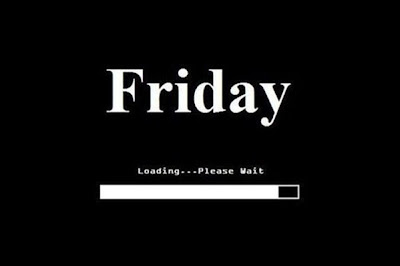 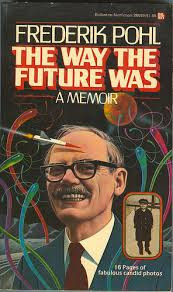 Go in peace, Frederik.  I can't help but think you've already been reborn on a planet three-quarters of the way across the galaxy.
Posted by terry at 8:20 PM No comments: 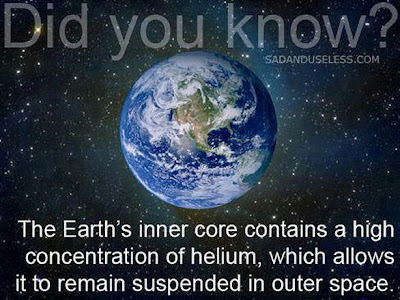 Well, I mean, how else could you possibly explain it?
Posted by terry at 8:27 PM No comments: 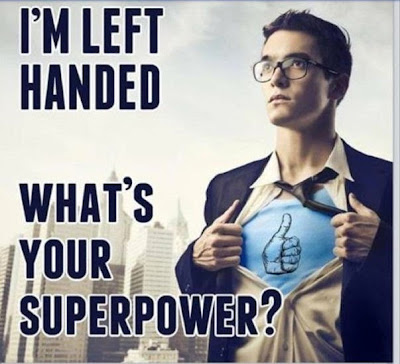 It's true.  I'm left-handed.  Which makes it hard to be humble in this right-handed world.
Posted by terry at 7:51 PM No comments: 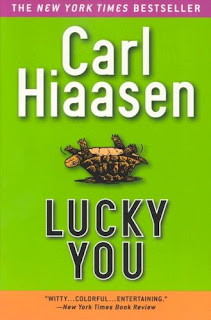 “Think about it,” he’d said to Chub.  “How many wheelchair people you actually see?  And look how many thousands of parkin’ spaces they got.  It don’t add up unless . . . “


“Unless those parkin’ spots ain’t really for the handicaps,” Bode had surmised darkly.  “What color’s them wheelchair permits?”


“Hmmm-mmm.  And what color is the helmets worn by United Nations troops?”


“Yessir!  Bode Gazzer had shaken Chub by the arm.  “Don’t you see, boy?  There’s an invasion, who you think’s gonna be parked in them blue wheelchair spaces?  Soldiers, that’s who.  UN soldiers!”


(from Lucky You by Carl Hiaasen)