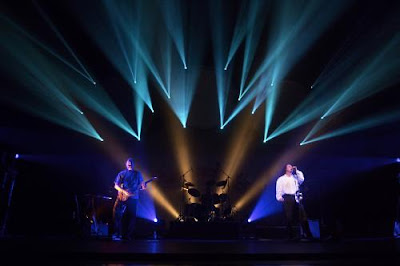 We went to see The Pink Floyd Experience last Sunday at the Chandler Arts Center. No, it wasn't actually Pink Floyd. Just a group of musicians playing classic PF hits, and giving you a "vintage" PF light show. 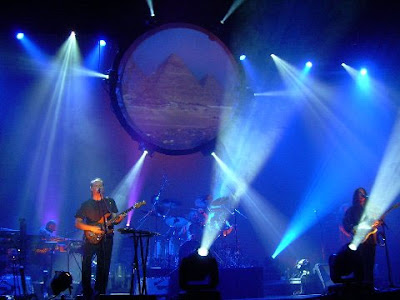 You got all the hits, except maybe Learning To Fly and Echoes. They even did one very early PF tune in memory of Syd Barrett, who passed away recently. That was a kewl piece of homage. 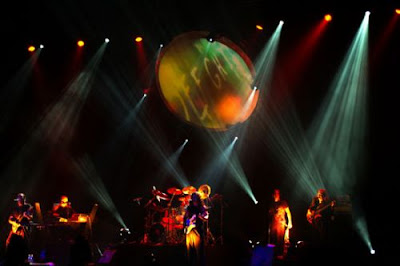 They had the surreal background pictures a la the "Dark Side of the Moon" tour. No crashing airplane though. They played the whole DSOTM album from start to finish right after intermission. Awesome! 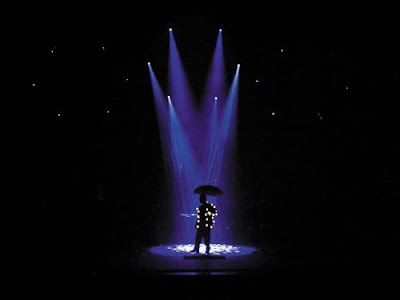 The light-bulb man made a brief appearance. I missed the PF tour that included this effect. 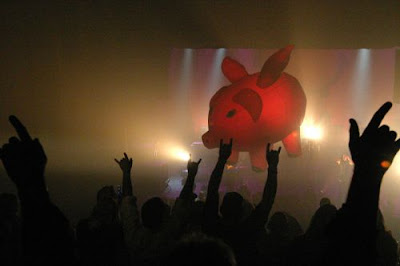 And of course, the floating pig had to make an appearance. 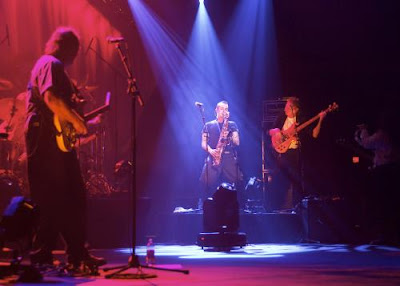 They struggled a bit to re-create the "One Of These Days" tune. But the rest was pretty true-to-original. And the (male) lead singer did a fantastic job of doing the high, black female vocals from DSOTM. 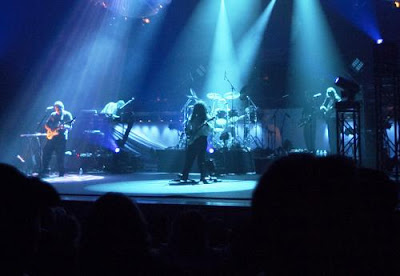 All-in-all, a worthwhile concert. Especially since the real PF no longer tours. BTW, I didn't take these photos. They've been 'borrowed' from... 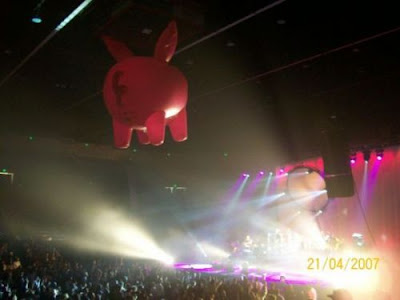 www.thepinkfloydexperience.net
Hey, these guys are good! Check out their tour schedule and catch them the next time they come to your town. 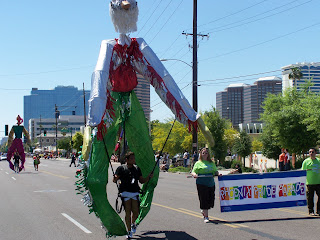 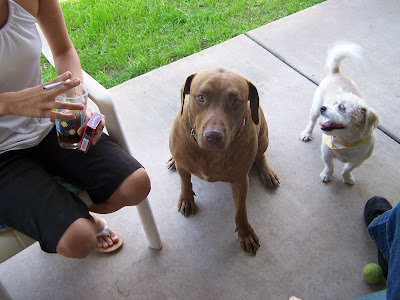 Time to get some Easter pics posted, before Memorial Day rolls around. There were 14 people and four dogs enjoying the Holiday. Here are Preacher (Jason's dog) and Jynx (one of ours). 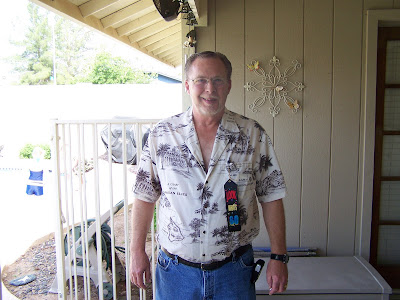 We also celebrated Doug's birthday. He turned.... oh yeah.... I promised not to tell how old he is. 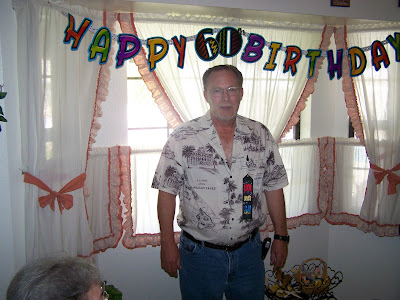 Yessirree bob! I would never reveal sensitive information such as someone's age. 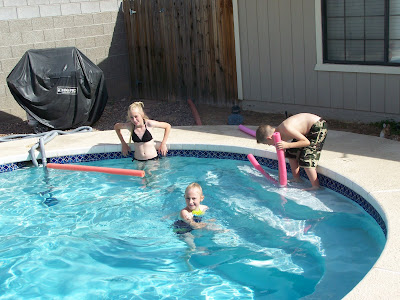 There was swimming for the young'uns, who swore that the water wasn't all that c-c-c-c-cold. Us old'uns had more sense than to believe them. 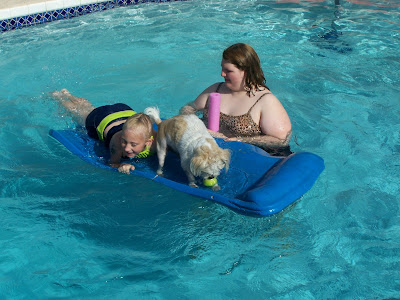 And even Jynx was coaxed to go in. Well, onto the raft via the lure of the tennis ball. Preacher also got in and swam. Actually, I pushed him in and he almost drowned because he doesn't know about steps going into the pool. So I had to quickly pull him out, and therefore there are no photos of the traumatic event. 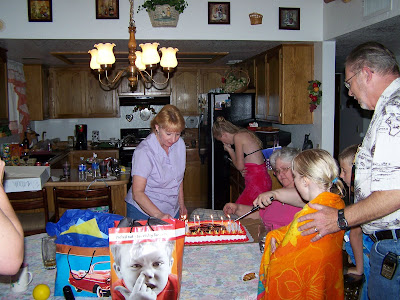 After swimming, there was the birthday celebration. 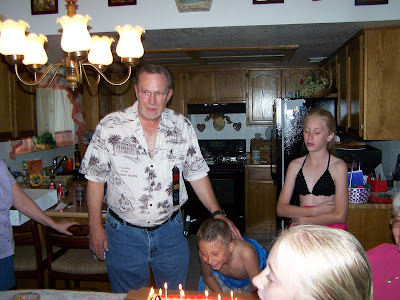 Help was needed to blow all those candles out! 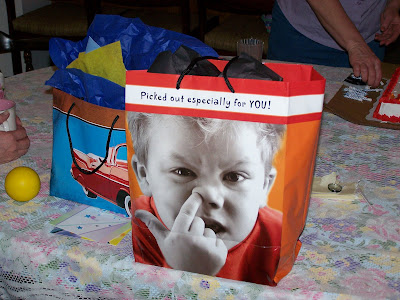 Is this a kewl gift bag, or what?! 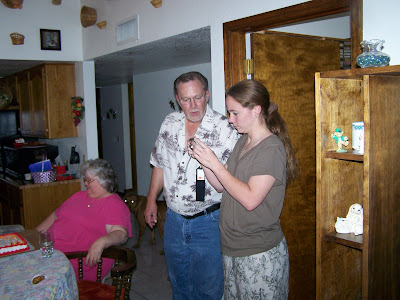 There was lotsa picture-taking. 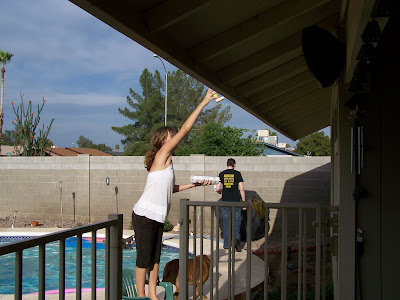 Then it was time to hide the Easter eggs for the kids. 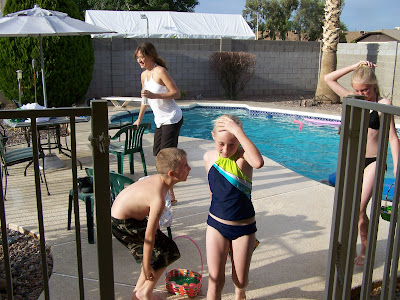 And finding them all was quite the challenge. 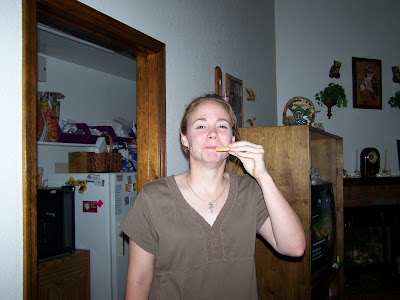 Finally, it was time for noshing... 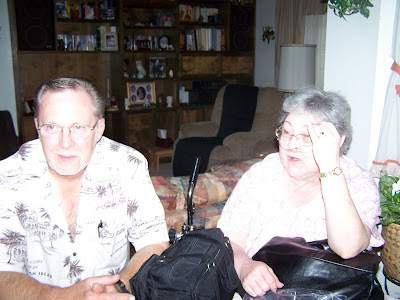 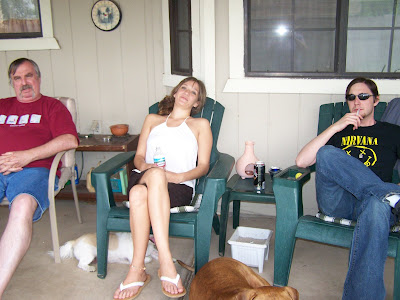 ... and last but not least, just plain old relaxing. Happy Easter to everyone who came over to celebrate! 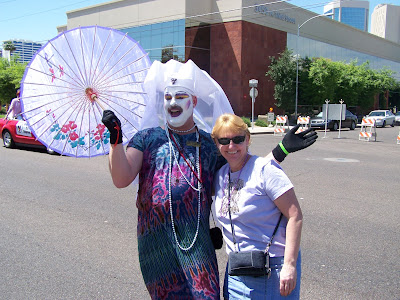 Yesterday was the 11th Annual Phoenix Pride Parade. It was the second year in a row that we made it. As usual, the interaction was great. Here's Liz with one of the entrants. No, that isn't me.

A separate blog with more pics of the parade to follow, as soon as I pare down the 200+ photos to a reasonable level.
Posted by terry at 5:23 PM No comments: 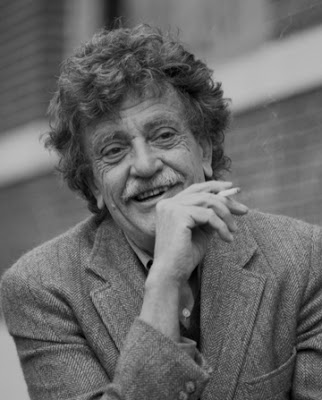 Kurt Vonnegut (11/11/22 - 04/11/07}
I first got acquainted with Kurt Vonnegut when I read "Breakfast of Champions" in High School. I didn't know anything about him or his works. But I did know that BoC was a short book, easy reading, and some of the pages had drawings on them, a few of which were even suggestive. In other words, it was a perfect way to fulfill a book report requirement. Indeed, I can only think of one better novel for a slacker's book report - "Flowers For Algernon".

I remember being mostly confused by BoC, but it served its purpose. Several decades would pass before I came to appreciate his writing, his politics, and his personal convictions.

Rest In Peace, Kurt. The world will be a bit emptier without you.
Posted by terry at 5:46 PM No comments:

- Character -
The main cheese of the Wheel of Time, so we might as well get our prediction for him done. He's also known as The Dragon Reborn, Shadowkiller, Coramoor, Car'a'carn, and a host of other honorifics.
- Chances of Surviving Tarmon Gai'don -
Define "surviving".
- Why He Won't Survive -
Min prophecied it.
- Why He'll Survive -
The Aelfinn prophecied it.
- If I Was Writing WoT, Rand Would... -
What does the Dragon Reborn do, once there is no longer a need for the Dragon Reborn? He's conquered a slew of kingdoms, yet doesn't show a bit of desire to actually do any ruling. He's going insane, and he's dangerously powerful. There's only one place for him, and it's the... WWF! Oops, sorry, World Wildlife Federation, I gues its the WWE now. Professional Wrestling hasn't had a star that could draw fans since Hulk Hogan got old. bald, and stopped taking steroids. Rand is a godsend. Want him to be a "good guy" this month, a "bad guy" next month, and a "psycho guy" the month after that? Rand's the man. And think of the pyrotechnics he can do. Yeah, the stub of a left-hand can be a problem, but we'll put some sort of bionic replacement on there. Maybe a mechnical claw. I can't wait to see him in a "No Holds Barred" match. ;-)
Posted by terry at 10:36 AM No comments:

- Character -
Originally, a village wisdom (healer) in Two Rivers, and a childhood friend of Rand, Perrin, and Mat. Now an Aes Sedai (in Egwene's camp), wife of Lan Mandragoran, and currently traveling with Rand.
- Chances of surviving Tarmon Gai'don (*) -

- Why She'll Survive -
Well, Min has foretold that Rand has to die in order to then live, so who do you think is going to heal The Dragon Reborn other than the most powerful healer in the land?
- Why She Won't Survive -
There's that touchy situation of being married to a man (king, actually), who's also bonded to Moiraine, and it is pretty obvious that Moiraine is going to be making a comeback in Book 12. Sounds like someone "has to go" in this triangle.
- If I Was Writing WoT, Nynaeve Would... -
... ditch Lan and start up a Healing Pyramid Scheme in the good old "Amway" business plan. Hire on other Healers (train them if necessary), and tell them to charge for their services. The "hirer" gets 10% of the profits. The "hiree" can in turn get enlist/train other Healers, but has to give 10% of her overall income to her "Hirer". Eventually, Nynaeve gets filthy rich, buys the throne of Malkier, and graciously offers to let Lan come back as her "consort". :-)
Posted by terry at 5:16 PM No comments: