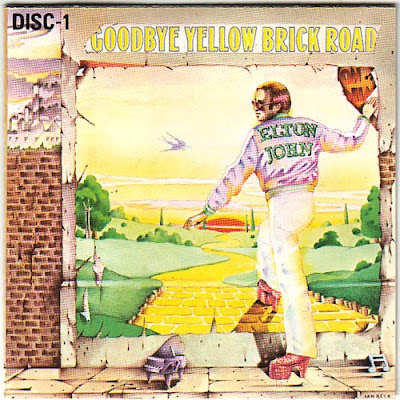 Big Surf is a wave-making water park in Tempe. Water slides, swimming, tanning, and surfing (naturally) during the day. Not much to do at night though, so they hold concerts there. No seating; you just pay a given price, bring your towel and sit on the ersatz 'sandy beach' wherever you fnd an open spot.
.
Goodbye Yellow Brick Road came out in October 1973, so this concert must've been in the spring or fall of 1974. GYBR was probably Elton's most ambitious album ever - a variety of musical styles (prog, reggae, R&B, and of course, rock-&-roll!), and not a dull stretch at all throughout the double-LP.
.
I was impressed (but not surprised) by Elton's piano skills. And his band totally rocked that night. Davey Johnstone (lead guitar) is awesome. I doubt Elton John concerts in 2007 would be as good. I'm thinking it would be mostly "see Elton tickle the ivories" and not much else. After GYBR, he put out one more great LP (Madman Across The Water); after that, it was mostly just sappy love songs.
.
But back to the concert at Big Surf. This is 1974, so we're talking 10,000 hippies. all stoned out of their gourds, passing doobies around, sitting on a beach at night, without a bad seat in the house to see Elton and company. Can it get any better than that?
.
HIGHLIGHT : The band's encore song - Saturday Night's All Right For Fighting. About a 15-minute version (or so it seemed) of the band cutting loose a la Bruce Springsteen.
.
LOWLIGHT : Hmmm. Can't think of anything. Sand in the joints, maybe?
Posted by terry at 7:42 PM No comments: 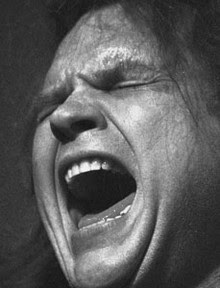 Top 5 Concerts Ever : #5
Meat Loaf - Bat Out Of Hell 2 - (1994)
A high-energy performance from a guy who is just as good live as he is in his MTV videos. Not a lot of pyrotechnics; just good rock & roll, Jim Steinman lyrics, and of course Meat Loaf singing his lungs out.

BOOH2 came out in 1993, so we probably saw him in 1994. I'm not sure where we saw him, but it was downtown Phoenix somewhere. Maybe AWA, maybe not. Cheap Trick was the opening act, which is ironic because, according to Wikipedia, Meat Loaf opened for them in the early 70's. Mr. Loaf did almost everything from the BOOH1 and BOOH2 albums.

You see, BOOH2 was his amazing comeback album. And if you read about his "lows" in between BOOH1 and BOOH2, you'll know how grateful he was for being back on the concert circuit again. The thanks were genuine. Now just try to imagine Mick Jagger ever saying something like that.

LOWLIGHTS : Cheap Trick was basically hawking their new album (Woke Up With A Monster), and that album sucks. Also, Jason's friend who went with us *free* (cuz we bought a ticket for someone else who then cancelled out on us), had this annoying habit of shrieking at the top of his lungs when no one else was shouting/cheering/clapping. I think he just wanted to hear himself in the big arena, but of course those around us were giving him dirty looks.

LP's from an auction are like a box of chocolates. You never know what you're gonna get. Today I "won" 300 LP's at the city auction. Six big cases of unseen vinyl. I outbid several other vinyl aficiendos (sp?) who were probably Used Record Stores. I won't give the $$$ I spent, except to say it came out to about 30 cents per disc.

The other time I got vinyl thru an auction (about 15 months ago), I got about 120 LP's. About half were rock-&-roll, and about 75% were in too bad of shape to play on the turntable.

This time, only about 5% of the LP's are unplayable. But there's no R&R. Just a bunch of (mostly) 50's/60's "easy listening" stuff - the kind my Dad used to have. "Artists" like Jackie Gleason, Benny Goodman, Englebert Humperdink, etc. And a host of unknowns of the same ilk. 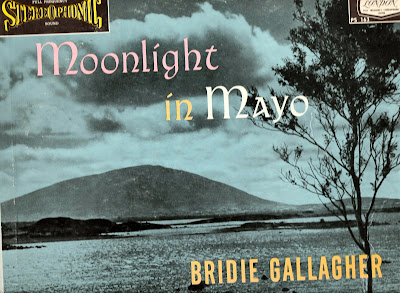 References to Bridie Gallagher can be found on Google, but she doesn't even rate a listing in Wikipedia. She's an Irish singer from the 1950's. About as exciting as the Lennon Sisters, singing "traditional" (for that time) Irish melodies. But without an Irish accent, fake or otherwise.

My dad would love this album. I prefer U2. But I'll listen to a bunch of these (and scan and post their album covers here), just so Liz won't yell at me for wasting money. Oh yeah, the six big cartons of LP's are cluttering up half the floor in the computer room. It won't be long before I'm given an ultimatum about that.

Economically, the most fascinating portion of this lot was about 30 old 78's. Alas, my turntable doesn't play that speed. So I think I may post those to eBay to see what kind of $$ they fetch. Gotta recoup some of my outlay.

Anyone interested in owning this fine LP, Bridie Gallagher - Moonlight in Mayo (circa 1958), drop me a line. Soon. Otherwise, it has a life expectancy of a kitten at the city pound. If no one picks it up in 72 hours, it'll be put to sleep.

The Kingston Trio - in Concert 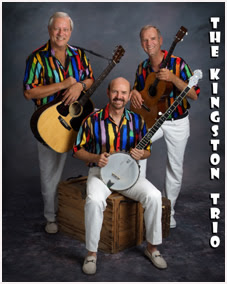 I've been a Kingston Trio fanatic for a long time, and last weekend, we finally got to see them in concert. It was in a small venue (Chandler Center For The Arts), which meant there were no bad seats.

Alas, none of the original members are with the group anymore, so this is a second-generation line-up. One of the originals, Dave Shane, lives here in the valley, and made a guest appearance to sing two songs, including Tom Dooley. But his health is frail (we'll cut him some slack, since he's in his 70's), and after the second song, he headed back off-stage for some needed oxygen.

They sang all the hits (except The Reverend Mr. Black), and gave us 2 hours of music for $4o/ticket, so one can't complain. And I snagged a CD/DVD for $20.

All in all, a good concert, although I wouldn't put it in my "Top 5 Concerts Ever". Which seems like a good topic for another post, so start thinking about your own T5CE.
Posted by terry at 5:55 PM No comments: