Why I'm a Conspiracy Nut 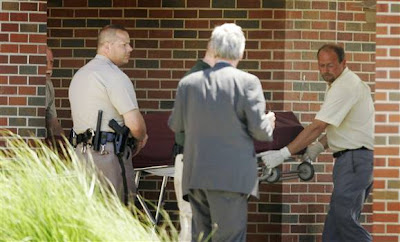 The Pro-Life thugs have done it again. They've murdered another abortion doctor, this time in Kansas. 67-year-old Dr. George Tiller was gunned down as he served as an usher at his local church. You can read about it here, although I'm sure there will be daily updates over the next few days. . It's funny how the Pro-Lifers are always the ones killing Pro-Choicers, not vice versa. I guess only certain lives are sacred. This highlights a theory I've had for a long time. . When you look at the notable American assassinations over the last 50 years - John F. Kennedy, Robert Kennedy, Martin Luther King, Malcolm X, Medgar Evers, the trio of James Chaney - Andrew Goodman - Michael Schwemer, etc. - it's always the progressives that are getting killed. . My theory is this : right-wing radicals think differently from the rest of us. There's something in their psychological make-up that tells them that murdering those who oppose them is justifiable. . "Ho-hum," you say. "It's just your conspiracy paranoia showing again, Terry." But consider this. We've just lived through eight years of the worst presidential regime ever. Led by a moron, we've regressed at least a half-century. Science was repressed while Dubya received messages from God. The "American way" was re-defined as going to war under false pretenses and waterboarding detainees. We went from everyone in the world feeling our pain after 9-11, to being universally despised for our arrogance. . Yet in all this, I never heard anyone on the left suggest that Dubnutz ought to be killed. Why? Cuz it's not in our psyche to solve problems that way. Which puts us at an inherent disadvantage. The wing-nuts have no such inhibitions. . I'm not suggesting that all Republicans are potential killers. I am suggesting that if someone is pre-disposed to murdering for a political cause, 99% of the time, he will be a right-wing militant. Which means Pro-Choicers and other Human Rights Activists will continue to get gunned down, while dittoheads rationalize it away by saying, "He had it coming."
Posted by terry at 5:18 PM

Stephen King wrote about this in Insomnia, which is my favorite book by him. The prolifers went into an abortion clinic/women's shelter and killed a woman who was seven months pregnant. She was staying at the shelter because her husband beat her to a bloody pulp and she needed a place to stay, and yet the prolife people killed her.

I think that percentage should be lowered to 85-90% though. You forget about the left wing nuts, like the PETA people...

I amy have to find that Stephen King book. I've yet to read anything by him. Horror is not my genre, but Imsomnia sounds interesting.

Re PETA - have they ever killed anyone? I know they resort to violence - smashing windows, tossing bloody carcasses at people, etc. but i don't remember them (or a lunatic loosely associated with them) ever actually killing someone.

I'm not sure about the killing thing. I do know that my brother knew a lot of vegans at UChi and one of them was actually on the ecoterrorist watchlist because of a bunch of stuff he used to do.

I'm not really a horror person either, but Insomnia was really really good. It was less horror and more psychological drama with a bit of the fantastical mixed in.