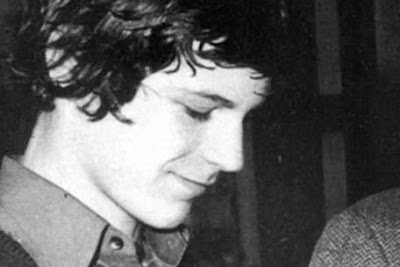 Nicholas Hughes
b. : 17 January 1962
d. : 16 March 2009
. The 47-year old son of Sylvia Plath and Ted Hughes hanged himself last week. Nicholas was a fish biologist by trade, was unmarried, and had no children. He had been suffering from severe depression just prior to his death. . There is a good article on how suicide and depression can run in family lines over at CNN. The link is here. It is unclear whether a proclivity towards suicide is genetic or psychological, but the relevant statistic is : "a first-degree relationship - parent, sibling, or child - is four to six times more likely to attempt/complete a suicide." . In an utter act of tastelessness, Wikipedia used his death to initiate a discussion on whether Nicholas's Wiki-entry should be deleted, since he isn't "notable" enough. Hey Wiki, he's the son of two famous poets, and is an integral part of the issue of family suicide. He is worthy of being in your database. . Rest in peace now, Nicholas. The pain has stopped.
Posted by terry at 8:09 PM

from what joe saxton says at the times i think the family feuds tha arose out of ted hughes' death contributed to nick's depression. ask frieda or carol. they know why.

This is so sad! I didn't hear about this. I imagine, though, almost dying as a kid while your mom was killing herself probably would have a profound (and not too positive) effect on your life. :(

Frieda issued a nice supportive statement after Nicholas passed away. i don't know who Carol is.

i agree re Ted Hughes' death contributing to Nicholas' depression. it's obvious the two were very close.

i'm sure Nicholas didn't recall his mother's suicide. but i wonder if knowing that she did it made taking his own life all that easier. particularly if genetically he was doomed to battle depression all his life.