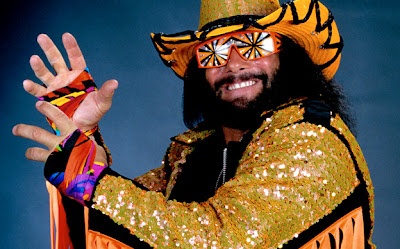 Randall Poffo (aka Randy "Macho Man" Savage)
b.  :  15 November 1952
d.  :  20 May 2011
Anyone who watched WWF (now WWE) will remember Randy "Macho Man" Savage.  Besides having Miss Elizabeth as his manager (in real life she was his wife), he was also a charismatic personality (just ask Slim Jims), equally adept at playing the villain or the hero.

Macho Man was an accomplished wrestler.  No, I'm not grading him on his championships, or who he beat - it's all scripted.  Rather, it's based on the believability of his moves, the precision of his routines, and the expressions on his face during the match.  Savage was a master.

Alas, their marriage fell apart in the 90's; Miss Elizabeth died of a drug overdose in 2003, the golden days of Professional Wrestling passed, and time caught up to the Macho Man.  Now mortality has caught him too.  The wrestlers today are sloppy compared to Hulk, Savage, and The Million Dollar Man (who IMHO was the best at doing precision moves).  And not surprisingly, other than maybe John Cena, none of them have the face-recognition and followings of these past masters.

So Rest In Peace, Randy.  God took you the day before the Rapture.  Or maybe She simply chose you to lead the procession.
Posted by terry at 8:22 PM

I agree, the old ones were the best. I can remember fuji yamamoto, gorgeous george, andre the giant. Those were the days:)

Gorgeous George I remember, and of course Andre, whose best work was in the movie, The Princess Bride. Fuji is new to me.

the only wrestlers I recall from my boyhood days are Bruno Sanmartino and Johnny Valentine (father of Greg "the Hammer" Valentine).