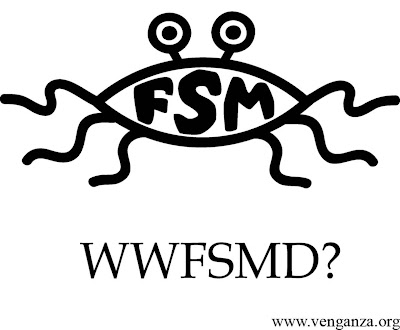 As promised, a bit more detail concerning the Church of The Flying Spaghetti Monster. It's been around for less than 5 years. You can visit their website at http://www.venganza.org/ for a lot more zany details. Wikipedia has a good write-up on them too.
-
While the emphasis at the CotFSM is on satire, they do serve a serious purpose. To quote their founder, Bobby Henderson, "I don't have a problem with religion. What I have a problem with is religion posing as science."
-
So when the Intelligent Design clods (the morons formerly known as the Creationists) tried to force science teachers in Kansas to teach their pseudo-science alongside the legitimate stuff, the CotFSM jumped in and demanded that their dogma also be taught. Their persistence paid off - eventually the IDc's backed off.
-
Folks, Intelligent Design is not a science. You can call it a philosophy; you can call it dogma; you can call it a religious belief. I'm cool to all that. But when you try to pass it off as "science", as a chemist I am offended. If we left the Church run Science, we'd still be learning that the Sun revolves around the earth, and that Dinosaurs either didn't exist (cuz they aren't in the Bible), or that Adam and Eve used to walk around with them (ouch! just try putting a leash on a Tyranosaurus Rex!).
-
In our next installlment, we'll present some of the FSM's "science". And a little later, I'll get around to the reason I'm featuring them.
-
Oh yeah, if you can't figure out "WWFSMD?", you definitely need to practice your acronyms more.
Posted by terry at 5:15 PM