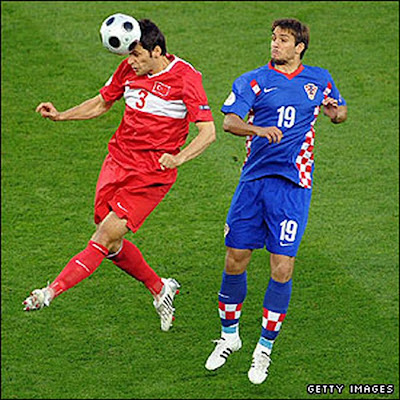 It was another game and another miracle for Turkey in the European Championship quarterfinals. With 7 of their 11 starters out due to injury or red-card suspensions, no one gave them a chance against Croatia.

But after 90 minutes, it was 0-0. Ditto after the first 15-minute extra period. Then with a minute to go in the second EP, Croatia scored, and their coach headed down the sideline, doing his victory strut.

But unbelievably, Turkey scored in that last minute, sending the game to Penalty Kicks, where the Turks prevailed 3-1. That puts them into next Wednesday's semifinal against Germany. No one is giving them a chance in that game either.

TRIVIA QUESTION : Of the 390 minutes played by Turkey thus far (we're ignoring the extra stop-time minutes), in how many of them has Turkey been leading?
Posted by terry at 8:25 PM