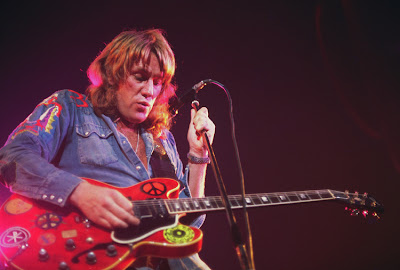 No, not Al-BERT Lee, who I saw in concert last week.  Rather, Al-VIN Lee, the erstwhile leader of the fantastic blues-rock band, Ten Years After.

I've only recently started getting acquainted with his music.  One of my college roommates had his On The Road To Freedom LP, and somewhere along the line I've heard Cricklewood Green, but that's about it.

I picked up Undead a while back (2007, apparently), and in recent months have digitalized Ssssh and the double-LP Ten Years After - Recorded Live.  I've been playing the crap out of the latter at work lately.  I've got three more TYA albums sitting in the computer room, waiting to be converted.

Alvin Lee died today, "after complications following a routine surgical procedure".  He was 68 years old, born 12/19/44.  I'm bummed because I'll never get to see him in concert now.  OTOH, I'm motivated to find and convert more of his albums.
Posted by terry at 6:24 PM