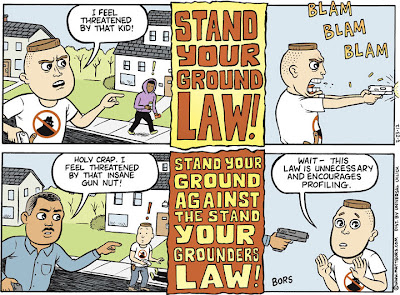 There was new police evidence released today that greatly supports the contention that George Zimmerman deliberately instigated the confrontation with Trayvon Martin, even though he had several opportunities to avoid it.  You can read MSNBC's article on it here.

It's a lethal combination when you're both a bigot and a gun-nut.  You're itching to finally shoot your pistol at somebody, and you go around just looking for an excuse to do so.  And when you think your a$$ is completely covered by the NRA-inspired "Stand Your Ground" law, any black male is fair game, as long as there are no witnesses.  The hoodie is proof that he either has just committed a crime or is about to.  Just ask Geraldo.
Posted by terry at 6:35 PM