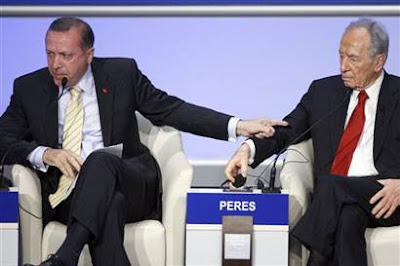 Kudos to the Prime Minister of Turkey, Recep Tayyip Erdogan, who rebuked and embarrassed Israeli president Shimon Peres at the World Economic Forum in Switzerland on Thursday, for Israel's recent overkill (literally) in Gaza. . You were hard-pressed to find this article anywhere; even MSNBC buried it on a back-page of its website. Nevertheless, you could find it if you looked hard enough, and a link to it is here. . It's a bold move for Erdogan to upbraid Israel and defend the Gazans. It squelches the timetable of the invasion of Gaza - which was carefully choreographed to happen during the transition of power in Washington, with the Israeli troops returning home just before Obama was sworn in. Nice and tidy for Israel, who hoped it would be forgotten by the time Obama got into the White House. Now Erdogan has brought the issue back into the headlines, reminding the world that the issue is anything but resolved. . Erdogan returned home to Ankara today to a hero's welcome. As for Dubnutz's predictable and lame-duck response, the cartoon below pretty much sums it all up. God, I'm glad he's been turned out to pasture in Texas. 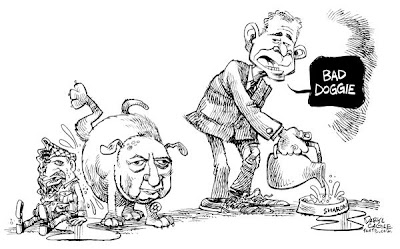 My thoughts are - if Israel's stupid enough to turn its allies against them, then they deserve what they get. I double your Kudos to Turkey.

i understand Israel's paranoia re Hamas. there certainly is some truth to them being a proxy for Iran. but that doesn't mean Israel gets to kill hundreds of civilians and hope that one or two of them turn out to be Hamas officials.