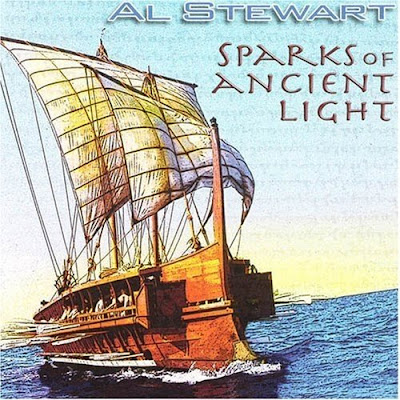 Artist : Al Stewart
Release Date : 15 September 2008
Genre : Folk-Rock (with a minor in History) Overall Rating : ***** ****½ (out of 10 *)
. This Week I'm Listening To... I've loved Al Stewart ever since KDKB here in Phoenix gave his Past, Present, and Future album extensive airtime in the early 70's. For some reason, other than Year Of The Cat (1976), none of his albums ever was a success with the un-historied masses. Perhaps it's because all his lyrics are poetic, intelligent, and deal with people and events that won't ever appear in People or Teen magazine. You won't catch Britney singing an Al Stewart-penned song. Heck, Britney wouldn't be able to even comprehend the words. . What's To Like... SOAL is vintage Al Stewart. The songwriting is superb. He's brought in Laurence Juden, formerly with Paul McCartney & Wings, and the two of them just shine on guitars. Al's voice is as good as ever, and all the tunes are catchy. There are no "new directions" here, but who cares? . About the only thing lacking is a 10-minute epic, such as Roads To Moscow or Modern Times. The longest track on SOAL clocks in at 5:41. . And Best Of All... See that album cover? That's a Phoenician trireme! It goes with Track 4, Hanno The Navigator. My Carthagenian alter-ego is ecstatic that Al chose to honor his heritage by writing, and then highlighting, a song about Hanno. You can read more about him here. . Bottom line - this is a fantastic album that unfortunately won't get any airplay. It's a typical Al Stewart "wet" album; i.e., a lot of the songs have water-related themes. And oh yeah, Al Stewart will be in Phoenix on 19 February at The Rhythm Room. It just doesn't get any better than this.
Posted by terry at 6:29 PM

You can find out about him at his website.

No doubt it was terrible handwriting on my part when i wrote it down.

i am pleasantly surprised that you are familiar with the good Mr. Stewart.