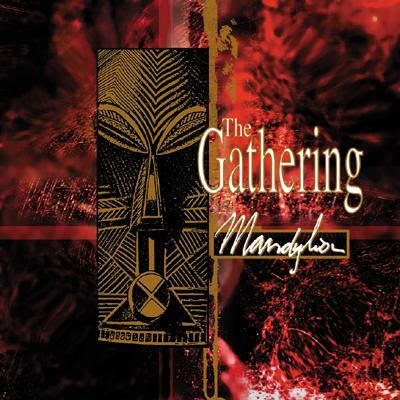 Artist : The Gathering
Album Title : Mandylion (1995)
Genre : Prog-Metal
Rating : ***** *½ (out of 10*)
This Week I'm Listening To...
The Gathering is a Dutch Prog-Metal band. Formed in 1992, they put out two nondescript, non-prog Goth-Metal albums, then in 1994 brought in Anneke van Giersbergen to be the lead vocalist. Their next album, Mandylion, was a ground-breaking effort in several respects.

It is reportedly the first Metal album to showcase a female lead singer. It also was the first Metal band to heavily incorporate synthesizers into the music; the end-product of which has been called "Atmospheric Doom" Metal. They even wove some audio clips from HG Wells' The Time Machine into Track 1; then followed it up with someone reading a Tolkien passage in the awesome Pink-Floyd-meets-Metal-sounding track, "Sand & Mercury".

So in a way, this is the band that blazed the path for groups like Within Temptation, Lacuna Coil, Leaves Eyes and Nightwish.

What's To Like...
The tracks range in length from 5 to 10 minutes. No radio-play drivel here. The compositions are multi-layered and well-crafted. The drums and the synthesizers are outstanding, but no apologies are needed for any of the musicians.

The historic impact of this album should not be understated. After 20 years of inertia, Metal was finally branching out in new directions, and Mandylion provided three or four of those new paths.

What's Not To Like...
As usual, the studio mixing could be better on some of the tracks. All the tracks on "Side A" (so to speak) have Anneke sounding like she's singing in a brick warehouse.

The guitar solos are well done, but they aren't high-energy. I suppose that's why they call this stuff "ambient", but I usually associate Metal guitars with lot more speed and va-va-voom than what is found here.

A Tale Of Two Sides...
The first four tracks are more metallic, and are strictly adequate. The last four tracks are all quite proggish, and are masterfully done. I won't try to predict which will be your favorite Track, but I will say that it will be one of Tracks 5 thru 8.

So we'll give Side A a 5-star rating and Side B 8-stars. That averages out to 6½ stars. One could justify a higher rating due to the historical influence this album had on Metal, but we'll settle for giving The Gathering a heartfelt "Thank You!" for delivering us from 20 years of snarling.

It is said that each one of The Gathering's subsequent albums represented a new direction and a maturing and refining of the group's musical proficiency. If so, I'm looking forward to finding more of their stuff. It should also be noted that Anneke left the group in 2007 to do her own projects (under the band name of Agua de Annique), so we can expect The Gathering's next album to also be something quite different from past efforts.
Posted by terry at 7:42 PM

hi there. you wrote,
“It is reportedly the first Metal album to showcase a female lead singer.”
that's not exactly true: there's also kari rueslåtten singing on the 3rd and the mortal's tears laid in earth, which was released before mandylion. in fact, the 3rd and the mortal's ep sorrow was released in 1993, while anneke joinsed the gathering in 1994.
about mandylion: i like all the tracks a lot, and it's one of the very few albums out there of whom i can say this. my favourite track is probably leaves...
cheers, felix