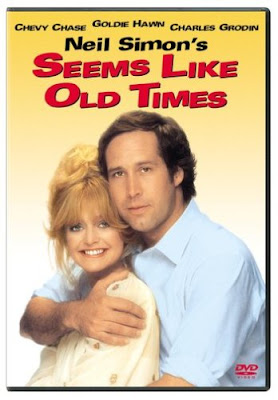 What's To Like...
It's laugh-out-loud funny, thanks mostly to Hawn's efforts, a good script, and a gaggle of gags and routines.  This is almost despite Chase (who's a great comic but can't act worth a lick); and Grodin (who received a "Razzie" nomination - for worst supporting actor - for this film).

The slack is taken up by a jive-talking chauffeur (T.K. Carter) and a no-nonsense cook/maid (Yvonne Wilder).  Heck, even the half dozen dogs do a good job of acting, especially the Yorkie.  Harold Gould plays the judge and almost succeeds with his Groucho Marx routine.  He doesn't quite pull it off, but hey, who can, outside of Groucho.

The performances by Chase and Grodin leave something to be desired, but the timing of the lines is perfect and I laughed throughout the movie.  I credit this to the director, Jay Sandrich.  In this day of "Dumber and Dumberer" comedies, it was a pleasant change to watch one where you were expected to use your brain a bit.

. Ultimately, this is more like an hour-and-a-half SNL routine than a coherent story.  But there are zingers aplenty and ample antics, which more than make up for the somewhat tepid ending.  You won't find the meaning of life or love here, but you will be entertained.  That's all I ask of a film.  8 Stars.
Posted by terry at 5:37 PM