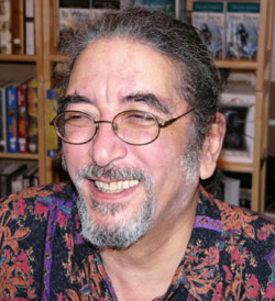 He was also an enthusiast in the Society for Creative Anachronism, {"SCA"}; his personna being named Yang the Nauseating. The Myth Series, besides recounting the zany antics of Aahz and Skeeve, is also rife with knee-slapping puns. Indeed, each book's title is a "Myth-play" on words : "Hit or Myth", "Another Fine Myth", "M.Y.T.H. Inc. Link", "Class Dis-Mythed" etc. And each chapter begins with a witty, contrived quote. Example : "Maybe I should have kept my nose out of it." - C. de Bergerac

The first couple tales have a lot of dimension-travel in them, an art that by now you know I engage in as well. However, Asprin's dimensions (ANAICT) are entirely fictitious. At least, I've never been on any that he describes. Nevertheless, a significant portion of the series' charm was seeing what pleasantly-dysfunctional world Asprin would come up with next.

Sadly, the series eventually staled. The puns got scarcer, so did new dimensions, and the storyline downshifted into first gear by following Skeeve's attempts to run a sorcery business. Boring.

Eventually also, Asprin ran afoul of the IRS, with whom he shrewdly finagled a deal wherein the Feds would receive a portion of the proceeds (for back taxes) from any and all future books written solely by him. So what did he do? For the last 10 years or so, all his books have been "co-authored" with various people. The IRS never got a penny. You gotta love his ingenuity!

The last Asprin-penned book that I read was called "Myth Alliances" (2003), and co-authored with someone named Jody Lynn Nye. It was okay, but still not up to the level of the first 4 or 5 books.

If you've read all the Piers Anthony books, and are looking for more, then the Myth series will fit the bill. You won't find true enlightenment here, but you will find yourself chuckling, and laughter is good for the soul.
Posted by terry at 5:59 PM