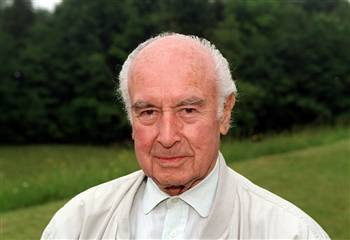 Albert Hofmann
born : 11 January 1906
died : 29 April 2008
Albert Hofmann passed away earlier this week at the tender young age of 102. He was a chemist, which we all know is the coolest profession in the world. We pay homage to him for the highlight of his illustrious career - being the first to invent (synthesize, actually) LSD-25.

He first made it in 1938, and in typical stoner fashion, promptly forgot about it for 5 years. On 16 April 1943, he unwittingly became his own guinea pig when he accidentally got a small amount on his finger, and it absorbed through his skin into his bloodstream. Three days after this first acid trip, he did another first - the first acid overdose, when he misjudged the dosage of his initial deliberate trip.

Throughout his life, Albert stood by his conviction that LSD was a legitimate psychoanalytical tool, taking lots of trips as part of his research. Yeah right, dude. Like I'm buying that story.

LSD was outlawed in the USA in 1966, which of course promptly led to thousands of flower-children trying it. Gotta find out why the feds don't want us to take this stuff, man.

Farewell Albert Hofmann! You have achieved deified status in the great realm of Hippiedom, right up there with such luminaries as Timothy Leary, Maynard G. Krebs, Jeff Spicoli, and San Mescalito. We salute your contribution to ...um... science.
Posted by terry at 5:08 PM

Throughout his life, Albert stood by his conviction that LSD was a legitimate psychoanalytical tool, taking lots of trips as part of his research.

Actually, second only to MDMA (ecstasy, as the hoi polloi call it), LSD is the most under-studied drug in psychology. Psychoanalysis aside (it's been widely debunked and mocked), LSD and MDMA have been thought to be perfect subject drugs for treatment of, among other things, post-traumatic stress disorder, cancer treatment (ya rly), alcoholism, depression, and so on.

yeah, we did a lot of studying of acid in college. and one of my cohorts was even a psych major.