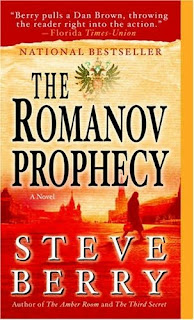 Title : The Romanov Prophecy (384 pages)
Author : Steve Berry (2005)
Genre : Historical Fiction (Action)
Rating : B
This month I Read...
My second Steve Berry novel (the first was The Third Secret); this one is less Cri-Fi, and more action. Set in modern-day Russia, where the people have decided they want to return to having a Czar as a ruler, Miles Lord, an American Afro-American lawyer on business in Moscow, stumbles onto a prophecy that implies that not all of the Romanovs were killed by the Bolsheviks in 1918.

What's To Like...
Lots of action from the get-go. It's heavy on historical references, which suits me just fine. Rasputin becomes a prophet, and Youssopov is re-made as a good guy.

The book is a page-turner, and Berry once again doesn't bore you with page after page of philosophical preaching. Take a note, Dan Brown.

What's Not To Like...
If there's such a thing as TOO much action, this is it. Essentially, this is a 384-page chase scene. The bad guys, professional assassins all of them, can't seem to hit an elephant from 50 feet away (much like in the movie Miami Vice, but that's a subject for another post). The hero finds the bad guys repeatedly and incredibly picking up his trail, and never figures out that his boss might possibly be tipping them off.

Finally, the plot pretty much plays itself out with no surprise twists. Berry could take a lesson from Brown in that regard.

Talk About Implausibility...
The most important parameter for any historical fiction is its believability. And TRP fails that in one key area.

No, I'm not talking about some of the Czar's family surviving. That's been a romantic, albeit highly unlikely hypothesis for decades.

Nor am I talking about the incredible inaccuracy of the assassins. You can rationalize that away as being subject to the divinely-inspired prophecies of Rasputin.

The unbelievable part is the opening premise that a majority of the Russian people would for some reason want to return to Czarist rule. Pigs will fly before that happens. Some Russians may want democracy; some may want a return to the Communist days; some may want some sort of uber-nationalism; and who knows, some may want Dubnutz to come stay with them after we throw his a$$ out of office next year. However, the one thing they can all agree on - no one wants the return of the Czar.

But I digress. The Romanov Prophecy is another solid effort by Dan Brown-wannabee Steve Berry. If it isn't quite on the same level as The Da Vinci Code, it's still a good read while we wait for Brown to get off his butt and put out another novel.
Posted by terry at 7:40 PM