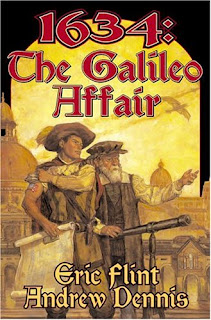 Title : 1634 : The Galileo Affair (2004)
Authors : Eric Flint & Andrew Dennis (667 pages)
Genre : Alternate History
Rating : D+
This Month I Read...
1634TGA is the first "1634" book in the 163x series to make it to paperback. This time, the USE (United States of Europe) send a diplomatic mission to Venice to develop strategic political and commercial alliances. Coincidentally, Galileo is going on trial in Rome for his allegedly heretical teaching that the earth revolves around the sun, and not vice versa. The protagonists in the book get to be both the defense attorney for Galileo, and his potential jail-springers.

What's To Like...
There's 667 pages to make you feel like you're getting your money's worth of reading material.

There's a number of new characters to get to know. Most notably, the resident hippie-cum-chemist, Tom Stone ("Stoner") and his three raised-in-a-commune sons. By "new", we mean they didn't appear in 1632 or 1633. They are introduced in the Ring Of Fire - Grantville Gazette anthology, which we'll review some other time.

You get to get up close and personal with 17th Century Venice. And if you're burnt out on all the fighting and killing in 1632/1633, you'll find this a much lighter-hearted book.

What's Not To Like...
There's very little action. 600 pages into this book, you realize there's been a grand total of one botched assassination attempt, one street brawl, and one pointless murder. The rest is, how shall we say it, drama. Sheesh, if I want drama, I'll go read Wuthering Heights. We read Alternate History for the action, and of course, the advancement of a parallel history.

And that brings up the second shortcoming of the book. It doesn't contribute one bit to the new timeline. Oh, relations are established with Venice. And Galileo goes on trial. But none of the dozens of loose ends from 1632/1633 are addressed, let alone tied up.

Worst of all, the theme of this book, "The Galileo Affair" comes off as unbelievable and shoddily written. The Swiss Guards appear to be the 1600's equivalent of the Keystone Kops. And although Father Mazzare gives a brilliant defense of Galileo, the author(s) don't see fit to give us any details of it. Both sloppy and lazy.

Where Does This Road Go, and Why Is It Paved with Good Intentions?
It's hard to know who to blame for this book. One suspects 99% of this was written by Andrew Dennis, with Flint's only contribution being to add legitimacy to it by putting his name on the cover, and to make sure AD doesn't write anything into the plot that might interfere with whichever way Flint intends to develop his particular 1634 sequel.

Flint's approach to developing the 163x world is certainly well-intended. He's allowing a number of other writers to contribute whole volumes to it. In theory, that allows "other viewpoints" to come into play. In practice, however, it means you're going to be reading a lot of meaningless, tangential "fluff".

Two other 1634 books are out in Hardcover. 1634 - The Bavarian Crisis, and 1634 - The Baltic War. And Flint is supposedly working on 1634 - Escape From The Tower. So it appears we will be stuck in 1634 for quite a few years. And we'll be paying $7.99 for each and every plot-advancement, with the occasional rip-off of no plot-advancement at all. I suspect, therefore, that 1634TGA will be the last book I read in this series, at least until the paperback versions start showing up at the used book store.

But I digress. 1634 - The Galileo Affair is a well-meaning but ultmately boring tome. If you just can't get enough of 163x, this may tide you over until Flint finishes his 1634 contribution. But for everyone else, you won't be missing anything important if you skip this yawner.
Posted by terry at 9:17 PM