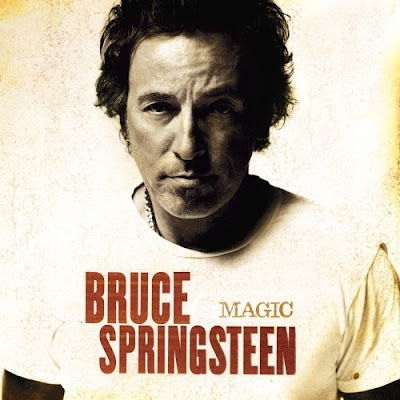 The Springsteen diehards are saying this takes him back to the Born To Run, Darkness on the Edge of Town, and The Wild, The Innocent and the East Street Shuffle days, but that's just wishful thinking. At best, this is a return to the Born In The USA days - when Bruce chose to "popify" his Rock & Roll in order to get more radio airplay.

What's To Like...
The tunes are all catchy little things, assuming you're cool with Bruce doing Pop-Rock. None of the songs come off as being filler. The East Street Band is back, including Clarence Clemons on saxophone.

What's Not To Like...
The studio mixing positively sucks. All the musical instruments seem to get pureed into a mushy background mix. I wonder if this was deliberate. If so, the studio engineer should be fired on the spot.

Bruce once again has a bad case of mumble-mouth. This started on D&D. Does this mean that The Boss' voice is shot? Or does he think that lousy enunciation comes off as being "sulkily brooding"? What's next - Bruce grunting like a metal vocalist? Let's hope not.

Then there's the small matter of repetitive lyrics. Here's a lame exercise to do - take the title phrase to each song (for instance, Track #1 is "Radio Nowhere"), then count how many times Bruce repeats it in the song. I'm sorry. We may tolerate a no-talent skirt like Britney doing this, but more is expected from the guy who wrote the brilliant tale-spinning lyrics for the TWTI&TESS album.

Finally, everyone on this album sounds ...well... tired. It's like Bruce's spirit wants to rock again, but the body keeps telling him to slow down cuz he's a geezer. The East Street Band comes off the same way. Are they feeling geezerish too, or did Bruce demand that they "tone it down" so as to not steal his spotlight?

Old Musicians Never Die, They Just Go From 45 RPM to 33....
Is it inherent that old rockers lose their pep? Maybe, maybe not. Let's look at the pro's and con's of this.

Rockers Who Have Become Geezers
01. Paul McCartney
Hasn't put out anything notable since "Uncle Albert". The last couple albums have been sheer schlock.
02. Lindsey Buckingham
Waited 14 years to put out a yawner. See my review a few months back for more details.
03. The Strawbs
Yeah, this is one of my favorite groups, but Deja Fou was painfully uninspiring.
04. Rod Stewart
The standard-setter for geezer rockers. His American Songbook series was pitiful. And he kept on doing it and doing it.
Now you might want to cut Rod some slack, since he was having voice issues. But consider the following...

Old Rockers Who Still Haven't Become Geezers
01. Meatloaf
He's older than me, he's had worse vocal problems than Rod, and he still puts 100% into his albums. Eat my shorts, Rod; and get back to work.
02. Carlos Santana
A high-energy act in the 1970's, who hasn't slowed down since.
03. Bon Jovi
I'm not a huge Bon Jovi fan (that's Liz's department). But listen to the "Have A Nice Day" album and compare it to "New Jersey" or any other early BJ stuff. The musicianship has evolved, but the energy level was, and remains, high.

Finally, "Tired Geezer Syndrome" should not be confused with bands who have lost contact with their Muse. In other words, the energy is still there, and so is the talent. But the creativity is gone. Some examples...

01. REO Speedwagon
Yes, Virginia, they still put out albums. They sound good, but nothing really jumps out and grabs you anymore.
02. Bad Company
2 good albums, followed by decades of "lounge-music rock".
03. The Rolling Stones
They lost their Muse halfway through Exile On Main Street, and have never got her back. What separates them from the rest of the Museless bands is - I don't think The Stones are even trying to find their Muse again.

But I digress. Springsteen's Magic has some serious flaws, but it's still a worthwhile acquisition. It's not a return to the Glory Days, but it's a step in the right direction We need to encourage Bruce to a.) get a better Mixing Engineer, b.) let the East Street Band shine a bit more, and c.) keep on rockin'. We'll give this seven stars, and hope that a "re-mastered" version of it comes out in the not-too-distant future.
Posted by terry at 2:58 PM

Not a big fan of the man myself though.

his first four albums are great, pure rock & roll. after that, it's either radio-oriented pablum, or mediocre new directions.

now for the more important question(s) - who is Katie Melua, and how come people like James Blunt and Pete Doherty are in the top five albums of the week? who will it be next week? Justin Timberlake and Kelly Clarkson? sheesh.