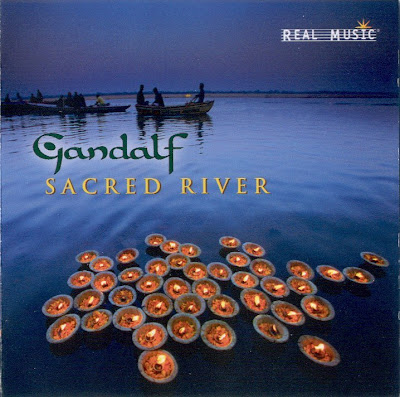 "Inspired by Siddhartha, who learns from the wise old ferryman to listen carefully to the voices of the river until he hears the eternal song of oneness and harmony, Gandalf invites you to imagine yourself in a boat on the Sacred River, letting the music be your ferryman, taking you gently across the water."

That actually is a pretty good description of this album.

What's To Like...
This is some very nice and surprisingly complex "mood music". Perfect background music for contemplating your navel, reading a novel, etc. The tracks really do sound like a gentle voyage down a quiet river. The arrangements are a superb combination of keyboards, guitars, and synthesizers; with a sprinkling of bells and 'wetness' (for lack of a better term) blended in.

What's Not To Like...
There's not a lot of variety to the tracks. You might enjoy "getting into" this CD the first time only. Thereafter, it's probably just something you'll put on in the background. And it's definitely not something to play when trying to liven up a dead party.

Om Mani Padme Hum (Hrih)...
It's always hard to rate New Age music. If I dock stars from Lindsey Buckingham for all the tracks sounding samey, shouldn't I do the same thing for Gandalf?

Probably not. "Mood music" isn't supposed to grab your attention. So kudos to this album for its beautiful tracks and for living up to Gandalf's own introduction. However, it's tough to award more than 7½ stars to something that doesn't really latch on to your consciousness.

For its New Age genre, this is a fantastic CD - better than David Arkenstone, IMNSHO. Just have no illusions as to what you are getting - it may be a masterpiece, but it's still background music.
Posted by terry at 8:54 PM