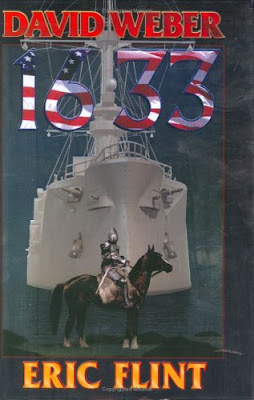 Title : 1633
Authors : Eric FLint & David Weber
Genre : Alternate History
Pages : 665 (paperback)
Rating : B+
The sequel to 1632, which was reviewed earlier. David Weber was apparently brought in to add a "big name" to the series. Which is kind of a waste, since I've never heard of him.

In 1633, our intrepid band of modern-day hillbillies have stopped slaughtering 17th century armies, and now are trying their hands at diplomacy & politics. There's not as much action as in 1632, but it's an interesting read neverthless.

What's To Like...
Again, the meticulous historical researching shows through. The historical figures of Oliver Cromwell, King Charles of England, Thomas Wentworth, Don Oquendo, and (Swedish) Princess Kristina are all introduced. Cardinal Richelieu is fleshed out, and if he can't be loved as the Ultimate Evil, he can at least be admired for his deadly charm and intelligence.

The French, British, Spaniards and Danes become the bad guys. The hillbillies, Swedes, Dutch and German peasants are the good guys. And unlike in 1632, some of the good guys actually die. albeit in a most heroic fashion.

The bad guys even manage some military victories, something sadly lacking in 1632. I have the impression that Weber's hand is to thank for the "evening-out" of characters, events, luck, victories, etc.

More unsettling is the large number of "loose ends" here. Ollie Cromwell is introduced but is still imprisoned in the Tower of London at the end of the book. Amsterdam is under siege. The Danes are threatening to conquer Germany. Richelieu is conniving like crazy. One gets the feeling that Flint is going to pull a "Robert Jordan" - that is, resort to the "never-ending sequel".

In conclusion...
It's still a very good Alternate History story. There are tedious parts (mostly when Flint gets to preaching his personal political philosophies), but David Weber supplies a much-needed counterbalance to Flint's sometimes too-shallow plot- and character-development. We can only hope that the loose ends don't go on for another 12 books or so.
Posted by terry at 6:57 PM