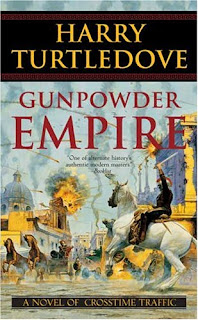 2003; 286 pages. Genre : Sci Fi - Parallel Universes; Young Adult. Book #1 of the "Crosstime Traffic Series". Overall Rating : C. . The Solter family has a novel way of spending their summer vacation - they travel to a parallel universe where the Roman Empire never collapsed. Technology-wise, that world has evolved up to muskets and cannons, so the "this-worlders" can trade common items from here - mirrors, mechanical watches, Swiss army knives, etc. - for much-needed grain. . What's To Like... Turtledove does a nice job comparing the two Roman Empires, and portraying how history might have changed if the Barbarians had never seriously threatened Rome. He also paints a detailed picture of the parallel medieval city, its government, and its daily life. . OTOH, the "this-world" timeframe is set at 100 years from now, and it isn't much different from the present day. No one wears furs (but we still eat meat), our computer understands our voice commands, and of course, we can dimension-hop. That's about it. Not a lot of progress for an entire century. . As usual, our dimension conveniently happens to be the most advanced one around. Just once, I'd like to see some more-evolved chrono-hoppers land in our world, and be condescending to us primitives. The ending isn't very climactic, and there's too much "telling not showing". See the "sexism" section on page 60. . Excerpt... But people were people, in her timeline or any of the alternates. Knowledge changed. Customs changed. Human nature didn't. People still fell in love - and out of love, too. They still schemed to get rich. They squabbled among themselves. And they needed to feel their group was better than some other group. Maybe they had more money. Maybe they had blond hair. Maybe they spoke a particular language. Maybe they had the one right religion - or the one right kind of the one right religion. It was always something, though. (pg. 43) . And the target audience is... It's important to know for whom Turtledove is writing this series . It quickly becomes obvious. The Solter kids are a pair of teenagers. The names of the parents are given once, then thereafter, it's "Mom said so-and-so" and "Dad did such-and-such". . There's no romance, let alone sex. The characters are cardboard thin and their actions predictable. After a couple chapters, the kids have to fend for themselves in the parallel Rome. War comes, and there is some bloodshed, but the horror of conflict - raping, pillaging, and plundering - is only hinted at. The emphasis at all times is how different the parallel world is from our own. . So this is an ideal book for a young boy - say, 7-12 years old - who is interested in alternate worlds. The lack of depth means there's not much here for an adult, unless you used to enjoy the 50's sci-fi books by Andre Norton. I did, so an occasional book like this is okay. We'll give it a "C", and stress that this isn't your typical Harry Turtledove series.
Posted by terry at 7:10 PM

there's bloodshed, but it's not a gore-fest. there's no booze, no drugs, and no cuss words.

Turtledove even puts a nice (their-world) Christian slave girl in the story, so Fundie parents will be cool with it.

From what I read, the whole series is in this style. an adult would go nutzo reading all of them, but when i was a kid, these would've been great.