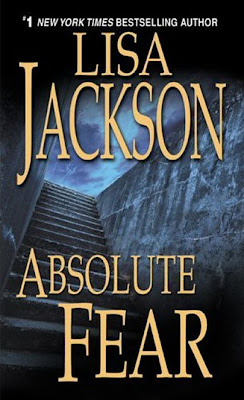 Title : Absolute Fear (2007; 494 pages)
Author : Lisa Jackson (b. 1952)
Genre : Murder-Thriller
Rating : C
This Month I Read...
A serial killer roams Louisiana, killing men, women, and a few old nuns in ritualistic fashion. Eve Renner gets stalked and shot, and has to deal with the possibility that her jealous beau could be the shooter/stalker.

What's To Like...
The story starts out fast, and continues for 500 pages that way. There's lots of mysterious clues to reason out, and someone gets offed every hundred pages or so to keep you from getting too relaxed. I guarantee you won't figure out who's the Ultimate Evil until the end.

What's Not To Like...
The heroine obviously has a death-wish. There's a psychopathic killer stalking her, and she just can't think of enough reasons to go off to places by herself.

Everyone is amazingly dense here. The killer tattoos 3-digit numbers onto his victims, and no one can figure out what they mean. Hey, it took me two pages to deduce that one.

Finally, there's a slew of unresolved loose-ends left lying about at the end, and one doesn't get the feeling they're there in order to carry over into the sequel. For instance, once our intrepid heroes figure out what the 3-digit numbers stand for, you're still left with a giant "so what?". Are these clever MacGuffins, or just sloppy writing?

And if you don't know what a McGuffin is, click here.

Wait! It's not Murder-Thriller! It's...
Think about where you found this book. Were there Nora Roberts and Danielle Steele books on either side? Maybe that should be telling you something.

Yes, folks. There may be blood, gore, moral outrage, death, and nunocide in this book, but at its core - it's Chick Fic. True love oozes from page to page, and threatens to overshadow the murder-mystery. I guess that's okay if you happen to be a chick, but male readers are hereby forewarned.

To sum up, Absolute Fear is overall an average novel. The unforeseen twists and action-packed chapters are offset by the IQ-challenged characters and the loose ends and MacGuffins. We'll give it a C, keeping in mind that if you like Romantic Thrillers, you might rate this a lot higher.
Posted by terry at 6:17 PM