Korpiklaani - Spirit Of The Forest 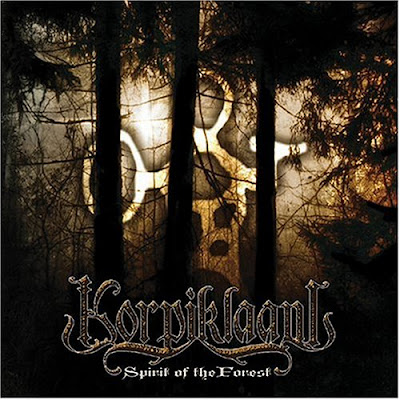 Artist : Korpiklaani
Title : Spirit Of The Forest (2003)
Genre : Folk-Metal (and Polka-Metal!)
Rating : ***** ****½ (out of 10*)
This Week I'm Listening To...
Korpiklaani ("Forest Clan") is a Finnish folk-metal group. They had an earlier incarnation called Shaman, but were forced to change their name cuz there were two other bands (one Brazilian; one Finnish) with the same name. SOTF is their debut album. Their most-recent release (2007) is called Tervaskanto, and they have a 2008 CD planned.

What's To Like...
Fantastic musicianship. The "folk" portion is an integral part of the music, not some trivial add-on, like you find with some Metal-Hybrid bands. The lyrics are in English. There's no filler here.

Best of all, there is a bunch of "polka-metal" on this album, which I happen to be quite partial to. This is a Finnish variety of polka, called "humppa". Last but not least, there is some "yoiking" on the album, which I'll let you look up in Wikipedia.

What's Not To Like...
At 9½ stars not much. Most of the criticism seems to be that there's not enough Metal in this Folk-Metal, and/or that the Vocals could be better. I don't agree with either of those viewpoints.

My only criticism is that Korpiklaani has apparently never toured the USA, and it doesn't appear that they have any plans to do so. C'mon out to Arizona, Korpiklaani! Just do it in the winter.

Is there such a term as "Happy Metal"?
SOTF is an upbeat, happy album. Indeed, it appears that Track 1 on any Korpiklaani album is always a drinking song, just to set the tone. That's a nice change from the usual drudge of Metal themes : loneliness, despair, etc.

SOTF will make you want to hit the local pub and share a pint with your friends. It's about trolls, forests, and yoiking; not about gloom, doom, and Satan. If you want a bit more Metal and a bit less Folk, I recommend Finntroll, with whom Korpiklaani occasionally does some collaborative work.

Bottom line : this is an excellent album, although it's hard-to-find in the USA except at Amazon.com. Their website (in English) is at
http://www.korpiklaani.com/
Visit them, and drop them a line asking them to come over to this side of the pond!
Posted by terry at 3:15 PM