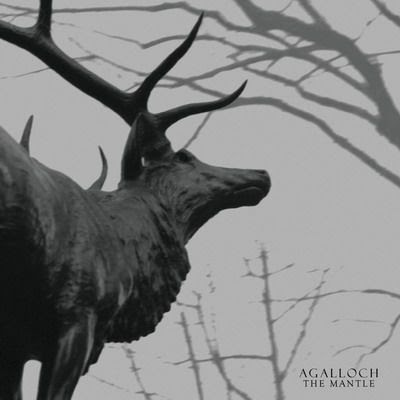 This Week I'm Listening To...
Agalloch is a metal band out of Portland, Oregon. The Mantle is their 2002 offering. They apparently have quite a dedicated following, as there are no less than 964 reviews/ratings for this album at RateYour Music, and another 68 reviews at Amazon.com. David Hasselhoofen, eat your heart out.

Picking a genre t0 describe them is difficult. RYM lists 17 genres (pretty good for only three albums, eh?), none of which seemed to fit the bill, so I chose a new one : Prog Ambient Metal.

What's To Like...
The Mantle is a unique blend. If Pink Floyd (from the "Meddle" time-period) decided to do a Metal album, it might sound like this. Track 2 (In The Shadow Of Our Pale Companion) is a 15-minute masterpiece. The music is complex, with lots of Floydish bells, wind, echoes, spacy guitar soloes, etc.

The album-length is slightly over 68 minutes, so you get your money's worth.

What's Not To Like...
The mixing could be better, but I'm learning to accept that when it comes to Metal groups. At times, the superior guitar solo is masked by the mundane metal-chording. Overall, the music is a bit too repetitive (but one could say that about Tangerine Dream too, n'est-ce pas?).

The snarling gets old, although to be fair, there is some singing mixed in. The lead and acoustic guitar-work, although good, is almost entirely at a slow-tempo.

Finally, it appears that Agalloch goes on tour about as often as Enigma does, and rarely strays out of their PNW environs.

In between the Intro and the Outro is the...
Most of the songs seem to consist of an Intro and an Outro, but it feels like something's missing in between, even when the Intro is 10 minutes long. If Pink Floyd was doing this album, they'd cut the repetitive parts down by 75%, and stick in a half-dozen songs (you know, intro, verse, chorus, verse, bridge, chorus, outro).

But I pick at nits. This is still a good album, especially if you want something to play in the background while you read, say, the Collected Works of Edgar Allan Poe. It doesn't match up musically to the best of Scandinavian metal, but what American metal band does? The Mantle as its own, unique sound, and Agalloch goes its own, unique direction. If David Gilmour was allowed to produce and mix the next Agalloch album, it would surely be a ten-star affair.