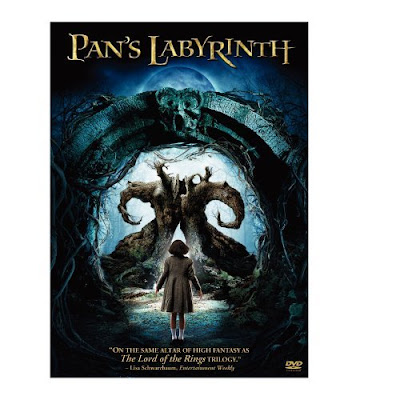 Title : Pan's Labyrinth (2007)
Genre : Adult Fantasy (Rated R)
Rating : ***** (out of 5*)
This Weekend I Watched...
I only watch about three movies a year, so I try to make them good ones. By "watching" I mean either going to the theater; or if at home, turning off the PC, putting down the crossword puzzle magazine, and actually concentrating on the film.

I'm pretty much on schedule in 2007 - I've watched two movies so far. One was fantastic; one was a dud. This is the fantastic one.

Set in the Spanish Civil War (more or less), the movie focuses on a 12-year-old girl (Ofelia) who retreats into a fantasy world (seemingly) to escape the horrors of the war and the desperate situation she and her pregnant mother find themselves in.

There are two worlds and therefore two plots. In the "real" world, Ofelia has to deal with a sadistic stepfather commandante, a pregnant mother whose health is rapdily deteriorating, and a Civil War where the Fascists (led by her stepfather) are holed up at a rural mill, trying to hold off the Communist guerillas.

In the fantasy "world", Ofelia is the princess, the chosen one, who has to perform three herculean tasks to prove her worthiness before being able to claim her throne.

What's To Like...
Awesome cinematography. A clever interweaving of the two storylines. Some perfect Castillian Spanish for you to practice your second language on. (I found I remember the Spanish cuss words reall well) And this movie will hold your attention from the beginning to the end.

What's Not To Like...
Nothing from me, since I give it five stars. The complaints from those who didn't like it fell into a couple categories.

Too gory! Yes, it is a brutal film, no doubt about that. And the cover advertising calls this film "on the same altar of high fantasy as the Lord Of The Rings Trilogy", which frankly is a misleading comparison. This is better characterized as an "adult fairy tale". There's no sex and no nudity. So reason it out - the "R" rating comes from the violence.

There are (English) subtitles! I can't watch the movie if I have to read! This complaint seems to come from folks who have trouble walking and chewing gum at the same time. I've watched a lot of foreign films, often in languages I don't know a word of. This is NBD for normal people. Of course, it's equally possible that the folks who gripe about the subtitles are actually "English-only" cretins who think a movie in Spanish is undermining the American way-of-life.

It's not an uplifting film! War isn't uplifting. Get used to it.

It's not historically accurate and/or It's too biased in favor of the Communists! There is some merit to these two complaints. The story is set in 1944 (we know this because the news of D-Day comes during the story), but the truth is the Spanish Civil War was finished in 1939. And the "real world" plot line does present the guerillas as the good guys. Although in the film, they can be just as brutal to their enemies as the Fascists are.

"War Is Hell" not "War Is Heck"...
For me, the main point of this movie is that War is a brutal thing. It's horrifying enough for adults, but no child should ever have to deal with killing, torture, and utter hatred.

That's what's wrong with the American public and the War in Iraq. The TV networks present us a sanitized, censored version of what's going on over there. We don't see the blood; we don't see the gore; we don't see the mutilated bodies; and we don't see the hate. Dubnutz is hoping that we therefore see the war as a noble thing, although his "noble reason" seems to change from one lie to the next. It's time more Americans dialed in to Al Jazeera and other foreign outlets (the Europeans do a much better job of showing the "real war") and get a dose of reality.

But I digress. Pan's Labyrinth is a stellar movie. Just don't watch it with the kiddies, and do expect to feel the same horror that Ofelia does. I won't spoil the ending for you, but will leave this for you to think about when you've finished watching PL - according to the film, is the fantasy world in fact real, or was it all a figment of Ofelia's imagination?
Posted by terry at 8:08 PM