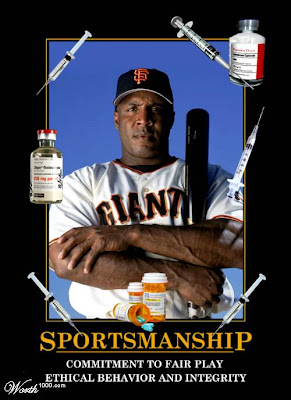 The inevitable finally happened - Barry hit #756. Then added #757 the next night for good measure. It's time to devote a posting to Balco Barry, then hopefully, as with Paris Hilton, never mention his name here again.
.
Kiss My Asterisk...
Let's deal with the easiest issue first - should Baseball put an asterisk beside Barry's career Home Run total? The answer - absolutely not! I remember when they did this to Roger Maris for daring to hit 61 home runs in a season, thus eclipsing The Bambino. What a pointless gesture. It's simple math - Balco Barry 757 (and counting), Hammerin' Hank 755. Commissioner Bud, if you have a problem with this, you shoulda done something about it long before #756 got smacked.
.

So don't even try to imply that white folks who think Bonds is a cheating, lying scumbag are racists. We don't like Mark McGwire, and he's white. We don't like Rafael Palmeiro, and he's Hispanic. They're all cheating liars, and doing the game of baseball a disservice by trying to hide it.

Indeed, the only one we seem to have "pardoned" is Sammy Sosa. A black. But he's come off the juice, shrunk in half, and is quietly toiling away for my Texas Rangers. And doing quite a good job, too.
.

Hall of Fame or Hall of Shame...
Here's where moral outrage can be made to count for something. We don't let Pete Rose into the HoF. We gave McGwire a whopping 25% of the votes (75% is needed) on last year's ballot. It'll be a few years yet, but here's hoping that Bonds gets less first-year votes than McGwire did. Send a message to all baseball players out there.
.

Is he cheating...
If you're still asking this, you probably think professional wrestling is a legitimate sport and that OJ didn't do it.
.

Maybe he didn't know they were steroids...
Yeah right. He injects himself and smears "the cream" on his butt, and fights like hell to keep anyone from uncovering that. He knew.
.

So he's the Bad Guy...
Yes, but he's got company. The biggest lying, cheating scumbag in this whole affair is Baseball itself. MLB knew these guys were juiced and, far from doing anything about it, actively encouraged it. Oh, they would have preferred that the massive steroids use be confined to Sosa and McGwire, who at least pretended to be role models.

But that's the trouble with condoning cheating - if you let 'nice guys' do it, there's not much you can say when an arrogant, jealous, lifelong pr*ck decides to get in on the acclaim.

The only reason MLB is doing anything now is cuz if they don't, they know Congress will. Folks, Congress may not be willing to get us out of Iraq, protect our constitutional rights, or stop spending money we ain't got. But give them this much - they got serious with Baseball.
.

What's Barry's biggest accomplishment in 2007?
Well, he's gonna cost Bruce Bochy his job at the end of the season. And he's much of the reason that the Giants suck this year. He doesn't hustle, he's not a leader, and the only thing he sees in the word "Team" is "Me".

Yeah, I know he's old and his knees are rubble. Then for goodness sake, retire your butt, or go to the American League and be a designated hitter. But good luck in finding an AL team that wouldn't consider you a clubhouse cancer.
.


If you want to hit home runs like Barry, you gotta get juiced.
The attitude to have as a ballplayer is to be an arrogant jerk.
Forget about "manufacturing a run"; just keep swinging for the fences.
If anyone questions you and (heaven forbid) writes something bad about you, threaten to sue them.
When all else fails, have ESPN champion your cause and you. Which was more phony - Hulk Hogan pinning an opponent; or Barry crying in "Bonds on Bonds"?
Choose your lackeys carefully. Make sure they're willing to rot in jail on a Contempt of Court charge rather than reveal your cheating.


So congratulations, Barry. You did a lot (of steroids) to accomplish this goal. God only knows how many kids are going to follow your example. Not that you care.
Posted by terry at 6:26 PM

Most ballplayers today are taking homeopathic hgh oral spray because it's safe, undetectable, and legal for over the counter sales. As time goes on it seems it might be considered as benign a performance enhancer as coffee, aspirin, red bull, chewing tobacco, and bubble gum.