In the midnight hour... 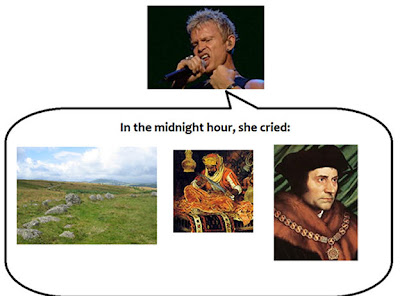 Been thinking on this one for a while...recognize the first two, but the third has eluded me. Share pretty please??

PS I know I'm going to feel like an idiot when it's revealed, just didn't want to 'google cheat'.

the third one is Sir Thomas More, Archbishop of Canterbury (IIRC), who opposed Henry VIII's splitting from the Roman Catholic church so he could marry Anne Boleyn.

there's a play about this, called A Man For All Seasons, which I read a long time ago - probably in High School, probably cuz it was short ( <200 pages), a probably for a book report.

the book/play has a happy ending - Henry VIII has More beheaded.

Aha, I was going to feel really dumb if he was some famous scientist that I was supposed to remember from way back when. Sad he got beheaded, not so sad I didn't remember him. :P

Al Stewart did a nice song on Sir Tom More. Called it, natch, "A Man For All Seasons".

But I'm guessing Al Stewart is before your time.