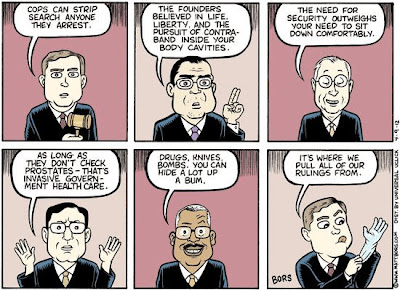 So.  The MSNBC.com banner reads "Supreme Court signals it's OK with parts of Arizona's immigration law".  You can link to the article here, and I'm assuming they don't change the headline.

This is not going to be a rant about how racist SB 1070 is.  That's a given.  Nor will I gleefully tell you about the bigot that sponsored it here in Arizona - Russell Pearce - who we've booted out of office because he's such a pig-headed bigot.  Well I admit, there's a wee bit of glee there.

Instead, this is just to register my surprise that MSNBC considered SCOTUS's "signal" newswrothy.  Does anyone really expect them to rule otherwise?  You have 4½ right-wing political stooges sitting on the bench, plus Elena Kagan has recused herself because she worked on the case as part of the Obama administration.

Folks, these are the dweebs that felt it was okay to strip-search and cavity-probe a suspect - twice - who was in jail because the cops had misidentified him as someone who had outstanding traffic tickets.  What can you expect of these idjits?
Posted by terry at 6:29 PM