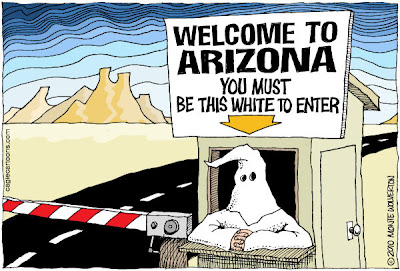 ...unless, like us, you already have.  Here in Mesa, there's only one thing on the ballot - whether or not to recall our local racist, Russell Pearce.  Needless to say, we voted for the alternative - Jerry Lewis.

Pearce has run a particularly nasty campaign, including funding a phony 3rd recall candidate (to siphon off votes from Lewis), and just out-and-out libelous, hand-painted signs, declaring "Jerry Lewis is scum", etc.  Which is just a tad odd, since this recall election bascally pits a white, moderate, Mormon Republican against a white, bigoted, Mormon Republican.  You'd think Pearce would play "nice-nice" since it's a fellow GOP-head.  Not so.

In Phoenix, they're voting for mayor in a weird syatem that allows about 15 candidates, but theoretically nobody is of any political party.  Yeah, right.  There are really only two candidates with a chance - one backed by the Democrats; the other by the Republicans.  And everybody knows it.  Needless to say, we endorse Greg Stanton, the Democratic candidate.

Vote with us or vote against us.  It doesn't matter.  The main thing is - get down to the polls tomorrow and vote!!
Posted by terry at 7:44 PM