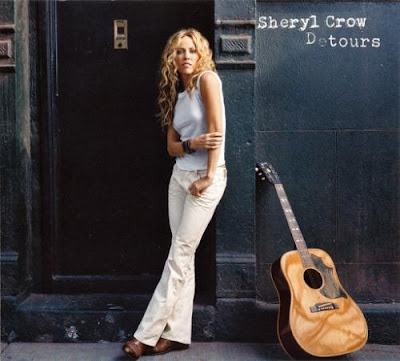 Artist : Sheryl Crow (b. 1962)
Album : Detours (2008)
Genre : Country - Pop - Folk - Rock
Rating : ***** ***½ (out of 10*)
This Week I'm Listening To...
Sheryl Crow's latest release finds her reuniting with Bill Bottrell, who produced her breakthrough, early albums. It is also a "coming out" effort - Sheryl touches upon a number of political themes - including global warming, the war in Iraq, post-Katrina New Orleans, and the idiocy that is Karl Rove. Some of the songs are also introspective - a lullaby to her new (adopted) son; her brush with breast cancer, etc.

What's To Like...
There are 16 tracks, and about an hour's worth of music here. "Side A" is exceptional - a beautiful mixture of themes & styles, all of which have catchy, upbeat lyrics that you'll be singing to yourself long after the album is done. The studio production is flawless. If her last couple CD's have been so-so; this one recaptures her muse.

What's Not To Like...
"Side B" slows down a bit, and turns inward. They are meaningful tracks if you know the background to them; if you don't, they aren't very memorable.

Most of the criticism comes from C&W wingnuts who are offended that Ms. Crow should disagree with our Chimperor Dubnutz on things like the war, global-warmng, etc. Hey, dittoheads! The latest polls show our Preznit setting new all-time records for umpopularity - 19% and falling. Your ostracization of the Dixie Chicks didn't work; you'd better get used to the fact that 4 out of 5 people are fed up with your brown-shirt politics.

God Bless This Mess...
I tried hard not to like this album, partly due to SC being the poster-child for the RIAA; partly due to the fact that it's "just another chick-singer album". Alas, it really is an excellent CD; and I chided myself as I kept putting it in the CD player time after time.

Personally, I'd rate the first half of the album 9½ stars; and the second half 7½ stars. Best tracks : God Bless This Mess; Peace Be Upon Us; Motivation; and first-and-foremost, Gasoline. Weakest tracks : Diamond and Lullaby For Wyatt.