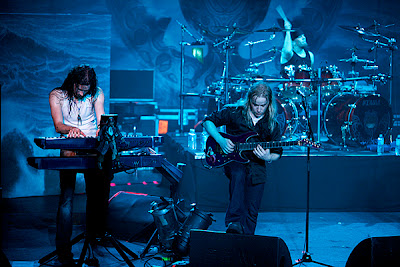 Who : Nightwish (opening act : Paradise Lost)
When : 07 November 2007 (doors opened at 6:30)
Where : Marquee Theater (Tempe, Arizona)
Rating : A-
- VENUE -
You have to accept that any Metal concert is going to be a standing-only affair, and will be in a cinder block-walled building where the acoustics suck.
If you're cool with that, then Marquee Theater is a great place . There is ample parking ($5 charge); a wide selection of draft beers and mixed drinks; the security is efficient but low-profile; and lordy-lordy the concert area was adequately cooled to accommodate an audience of 1000+.
The alcohol of choice for MetalHeads is beer. Don't ask for a wine list. And don't even try to buy liquor for minors; you WILL get your sorry a$$ kicked out immediately. Venue Rating : B+.
- PRICES -
Tickets were $23 apiece. Nightwish T-shirts were $30 ea.; a "hoodie" was $40. The Dark Passion Play CD was $20, and you got a Nightwish poster (approx. 11" x 17") free with the purchase.
I don't begrudge the expensive prices for the merchandise. The tickets were dirt cheap (they have to be for MetalHeads); and it's my understanding that merchandise sales is where the band itself makes its profits. Up yours, RIAA. Prices Rating : A.
- TIMING -
The doors did indeed open at 6:30 PM. Alas, Paradise Lost didn't start playing until 8:00. That's a long time to be standing around.
PL played for an hour, which brings us to 9:00. Then there was another 1-hour gap before Nightwish came on. That's 3½ hours after the doors opened.
We stayed until about 11:00 PM which was only about halfway thru NW's set. But that's way past our bedtime, and we both had to work the next morning. Timing Rating : D (but read on).
- CROWD -
The basic dress-code color is of course black. The overwhelming majority of the attendees were, naturally, teenage and 20-something MetalHeads. But there were several parents who were there with their young-teen kids; and a smattering of graybeards. I am happy to say I was not the oldest person there.
There was no moshing/pogo-ing. In general the ausience was well-behaved and loudly appreciative of the bands. Crowd Rating : A.
- OPENING ACT -
Paradise Lost is an English Doom/Heavy Metal band. They are apparently a lot better-known in Europe. There is a smattering of "symphonic" in their music, so they are a good fit with NW.
The lead guitarist played some excellent soloes. Or were they riffs? Or were they licks? I just know someone will explain the differences.
The drummer has a very good, eye-opening blog about touring, It is at :
www.paradiselost.co.uk/news/
It gives a great glimpse into the not-so-glamorous world of being on tour, and chastens me into cutting both bands a bit of slack when it comes to starting times. Opening Act Rating : B+.
- NIGHTWISH -
They are AWESOME!!
Lots of cuts from the DPP album. Anette Olzon makes you forget about Tarja, although I have to admit I've never seen the latter in concert. Okay, she did miss a note or two, but hey, what can you expect halfway through a grueling every-night North American tour? 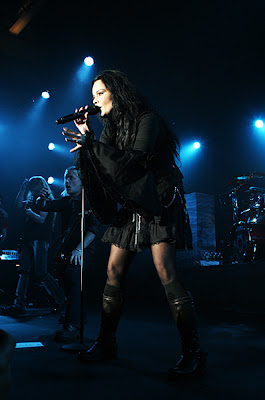 NW had the crowd eating out of their hands. The chemistry certainly appeared to be good; the musicianship was superb; and the song selection was crowd-pleasing. We all sang along with the first song - Bye Bye Beautiful. Nightwish Rating : A.
Overall, it was a great concert; probably in my Top 5 favorite concerts ever; easily in the Top 10. Here's hoping they come back to Arizona next year.
Posted by terry at 8:10 PM

Nice to see Paradise Lost making some friends in the USA. They never quite made it in the UK, despite being pretty good and having a big fan-base.

If Nightwish get an 'A', then I guess the *best* Sympho-Goth-Metal band, Within Temptation, would get an A+ :-)

Re Paradise Lost - I've listened to their latest release - In Requiem. Above-average, but kinda on the cutting edge of my Metal Tolerance.

Re WT, I agree. I really wanted to see them, but I didn't want it to be the last thing I did in this life. Hopefully, they'll stop here on their next tour.