Within Temptation - The Heart Of Everything 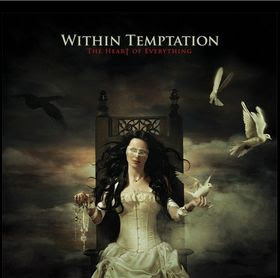 Within Temptation : The Heart Of Everything

Another very fine effort from the Dutch Symphonic Metal band, Within Temptation. What you think of it will depend a lot on what you think of their last two CD's - Mother Earth and The Silent Force.
-
THoE harkens back to early WT stuff. It's more "hard rock" and less symphonic - and even less Metallic - than TSF and ME. So is this a "regression" or a "return to our core values"? The answer is in the ear of the beholder.
-
WT has finally signed with an American distributor, so we may at last be able to find their CD's and videos in the record stores. And it is rumored that they will be doing a US tour with Lacuna Coil later this year. If so, I'm sooo there, even if I have to fly over to Los Angeles.
-
The only drawback to this album is the song-order. The first three tracks are quite "rock-ish" and take some getting used to. You don't get much symphonic metal until Track 4 (Our Solemn Hour), but from there through Track 10 (The Truth Beneath The Rose), it's classic WT. The final track, Forgiven, is a mellow ballad that feels a bit out of place on a WT album.
-
One gets the feeling that this CD's raison d'être is to break into the American Metal market. If so, it's a good effort. Move over, Evanescence. Its time the US gets treated to some superb European Metal.
Posted by terry at 9:30 PM